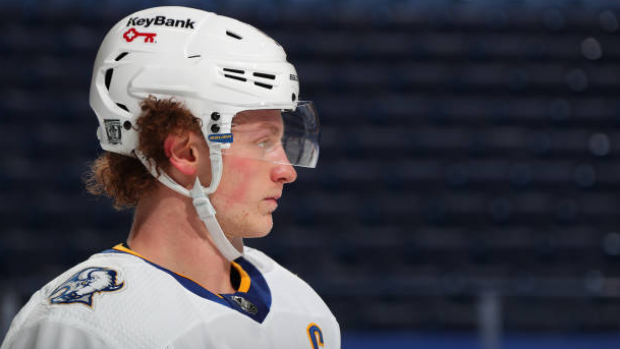 Buffalo Sabres captain Jack Eichel said Monday there's been "a disconnect" between him and the organization since his season-ending neck injury, and opened the door to speculation he could be moved this off-season.

“I’ve been a bit upset about the ways things have been handled since I’ve been hurt," said Eichel, who was officially ruled out for the season on April 14. "There’s been a bit of a disconnect between myself and the organization.

Eichel last played on March 7 due to a herniated disk in his neck. He added Monday that surgery is still an option as he works toward recovery.

TSN Hockey Insider Darren Dreger reports Eichel was was committed to an early May surgery last month, but as of late April, the doctors involved on the Sabres side were still working through the process and had not yet made a decision. Dreger notes that a difference in medical opinion is not unusual between a player and team, but normally there’s an amicable resolution.

Dreger adds that he doesn't believe a medical grievance has been filed with the NHLPA as of yet, but Eichel’s agent, Peter Fish, has been speaking with players association reps.

It’s going to be interesting to see how this saga unfolds. I don’t believe a medical grievance has been filed with the NHLPA, but I’m told Eichel’s agent, Peter Fish has been speaking with PA reps. https://t.co/3Wi72DByf5

"There's been some tough conversations but I've got to do what's best for me," Eichel added. "I'm only going to play hockey for so long. Hopefully I have many more good years in this amazing game but I've got to take care of myself."

The 24-year-old centre, who had two goals and 18 points in 21 games prior to the injury, has five seasons remaining the eight-year, $80 million contract he signed with the Sabres in 2017.

"I have a lot of thinking to do in this off-season," Eichel said. "I think that there's a lot that I have to consider. But for now, obviously, I'm here."

Jack Eichel essentially says the Sabres wouldn't let him have surgery on his herniated disk in his neck.

His body, his choice?

"It doesn't work like that. I wish. ... I'm under contract with this team and they definitely hold a lot of cards on what I can and can't do."

The Sabres missed the playoffs for the 10th consecutive year this season.