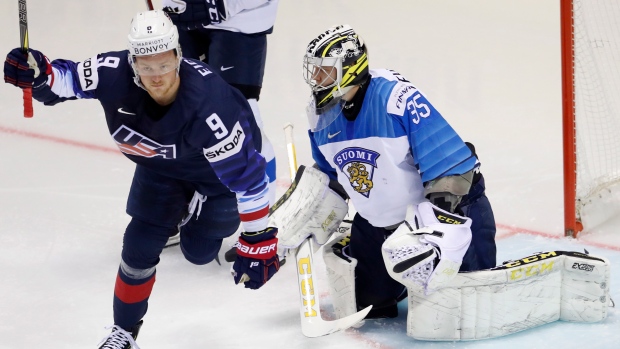 Jack Eichel has not been ruled out of the 2022 Olympics by Team USA, TSN Hockey Insider Chris Johnston reports.

The Vegas Golden Knights forward was given a three-month timeline for recovery from disc replacement surgery in his injured neck on Nov. 12. The men's Olympic hockey tournament is scheduled to open Feb. 9, with America facing China in their opening game one day later.

"There’s at least a possibility there," Johnston said Tuesday on Insider Trading. "The fact that it’s gone quiet is not a reflection of how things are going. In fact, Jack Eichel is right on schedule in terms of his recovery, which leaves the sliver of a possibility that he could be available to Team USA at the Beijing Olympics.

"At this point, I get the sense that no one wants to put pressure on this recovery. It was obviously a significant injury. He’s had the surgery, the trade’s gone through to Vegas and everyone just wants the process to play out.

"I don’t even think, necessarily that Team USA is banking on him, but it’s notable that with a little over a month before that team is chosen, it hasn’t been ruled out as a possibility for Jack Eichel."

Eichel hasn't played since incurring the neck injury last March. While he pushed for the disc replacement, the Buffalo Sabres preferred fusion surgery as it has been more commonly performed on hockey players over the years.

At an impasse over the surgery, Eichel was stripped of his captaincy in the fall and failed his training camp physical. The North Chelmsford, MA was finally dealt by the Sabres to the Golden Knights on Nov. 4.