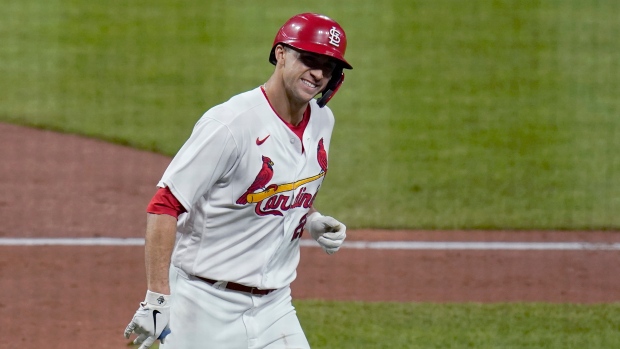 ST. LOUIS — Nolan Arenado showed the Colorado Rockies some of what they've been missing.

Arenado doubled in his first at-bat against his former team and went 2 for 4 Friday night as the St. Louis Cardinals beat the Colorado Rockies 5-0.

“Kind of weird,” he said before the game. “Anxiousness, a little bit, I guess in a way. But it will be cool to see some of the guys that I'm really close with and stuff like that. There's some guys I definitely miss as people.”

Arenado, a five-time All-Star and eight-time Gold Glove winner during with seasons in Colorado, was traded to the Cardinals on Feb. 1 for five players, including pitcher Austin Gomber.

Arenado doubled off Gomber (2-4) in the second, then struck out and grounded out. Arenado added a single against Lucas Gilbreath in the eighth

He had looked at the schedule more for when the Cardinals go to Colorado from July 1-4 than toward this series.

“I want them to do well,” he said. “Hopefully not this series.”

Colorado dealt Arenado after he feuded with the front office, which failed to build a strong team around him.

“I guess my only regret would probably be that I let it get to the media,” Arenado said. “I have no regrets beside that.”

While Arenado keeps track of his cousin, Josh Fuentes, and texts Trevor Story, Arenado admitted “I don't even know what they're record is.”

Part of the difficulty in keeping up is being in a different time zone.

“I haven't really been looking at it as serious as I thought I would. I though I'd be paying attention to it a lot,” Arenado said. “I really haven't. Just kind of keep up with certain guys.”

Flaherty (6-0) gave up three hits in seven innings, struck out six and walked one, retiring his final 13 batters. He lowered his ERA to 2.83.

“I think any win we have is going to be a team win,” he said. “Everyone is going to do something. Very rarely are you going to win a game by yourself. The pitcher could go out and throw a no hitter and drive in a run, but the guys around you have to make plays and the catcher has to call a good game.”

Colorado briefly had the bases loaded in the first after Garrett Hampson singled just beyond the infield in left. But Charlie Blackmon rounded second and couldn’t get back in time, and shortstop Paul DeJong threw behind him for the third out.

“It’s nice,” Cardinals Mike Shildt said. “Guys came off the field feeling good about it. Heads-up play by Pauly. That’s how the guys play. They’re looking to make plays all of the time.”

Flaherty homered in the third inning against Gomber in his 117th big league at-bat. The drive, on a 91.5 mph fastball with a 3-1 count, went 416 feet and landed just into the Rockies’ bullpen in left. It was the second-longest home run by a Cardinals pitcher, according to Statcast, trailing only a 426-foot drive by Miles Mikolas at Coors Field on Aug. 24, 2018.

"As pitchers, when we hit, we try to make things very simple," Flaherty said. "Sometimes you get lucky swings.”

Harrison Bader hit a go-ahead, two-run homer in the third for the Cardinals, who have won seven of nine. Colorado had a two-game winning streak stopped and has lost seven of nine.

"The home run by Bader was a little bit of a backbreaker because of the way Flaherty was pitching,” Rockies manager Bud Black said. “We just couldn’t mount any attack against Flaherty. They beat us on the mound. They beat us at the plate.”

Dylan Carlson had an RBI single in the fifth and Paul Goldschmidt a run-scoring grounder.

Rockies: 1B C.J. Cron (lower back tightness) was a late scratch from the starting lineup.

Cardinals: C Yadier Molina (right foot tendon) took batting practice and played catch on the field before the game. Molina was eligible to come off the 10-day injured list on Friday and is expected to return soon.