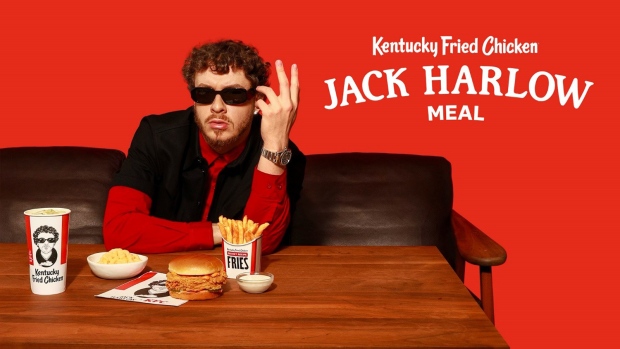 Jack Harlow is at the top of the world right now. He’s dominating the music scene as one of the top rappers of this next generation, winning awards with Lil Nas X and releasing his own studio album that features a steady list of big name artists featured, including his good pal, Drake. Now, Jack’s set his sights on his latest venture that sees him partnering up with his favourite hometown food chain, KFC.

The fried chicken chain first announced its partnership with Harlow in the winter and, after his visit to KFC’s Louisville headquarters in March, promoted a lineup of his favorite menu items. Now, the partnership has gone a step further to include a Jack Harlow Meal, curated by the artist himself that is available as of this week. The meal includes the spicy chicken sandwich, fries, mac & cheese, a side of ranch and lemonade and is served in customized Jack Harlow x KFC packaging.

“From releasing Come Home the Kids Miss You and now launching my own meal at KFC, I’m having a super blessed summer,” the Kentucky rapper said in a statement. “When KFC asked me to create my own meal, I knew it couldn’t be just any meal. My meal brings together my childhood favorites from growing up in Louisville, the KFC Mac & Cheese, with my new go-to Spicy Chicken Sandwich (with plenty of ranch), Secret Recipe Fries, and lemonade — it doesn’t get much better.”

Harlow took the collab one step further. Earlier, he stopped by one of the chain’s Atlanta locations this past weekend to promote the launch of the meal. He took pictures with fans at the restaurant — even donning a KFC employee uniform at the drive thru — as it featured a mural of the rapper on the side of its building, as well as an enormous chicken bucket featuring his face.

Jack Harlow at the KFC restaurant in smyrna. pic.twitter.com/w8sYXrZ60E

Harlow announced his partnership with KFC back in December, donating $250,000 to the American Red Cross to help with relief efforts for citizens hit by the tornadoes in western Kentucky in 2021.