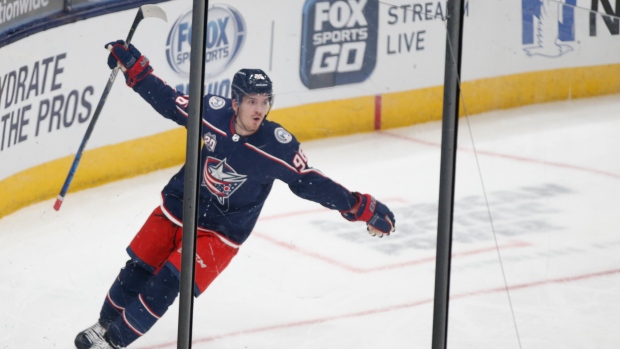 On Jan. 23, the Columbus Blue Jackets and Winnipeg Jets engineered a whopper of an in-season trade.

The Blue Jackets sent Pierre-Luc Dubois to Winnipeg in exchange for Jack Roslovic and Patrik Laine, resolving issues within the respective teams of disenchanted players looking for a fresh start elsewhere.

We haven’t been able to see Dubois in action quite yet, with the 22-year-old centre still awaiting clearance from COVID-19 protocol before joining the Jets’ lineup (he was placed on the active roster Tuesday).

But we have seen Laine and Roslovic in Columbus, and are getting a first taste as to how head coach John Tortorella will use them. (Or not use them!) Laine’s Monday benching aside, it’s clear that Tortorella thinks both players will have to be integral pieces for his team to succeed.

Laine has already tallied three goals in his first four games with the Blue Jackets, putting him one goal back of the team lead. Roslovic has been a point-per-game player – his two goals and five assists in seven games leading Columbus in scoring on a pro-rated basis.

But for fantasy owners, it’s important to understand which way the arrows are pointing for the respective players. The early scoring is nice, but opportunity and deployment matter a ton when forecasting a player’s longer-term production.

What you want to see from players in new environments is an increase in ice time, an increase in the quality of teammates around him (where able), and a degree of trust from the coaching staff.

It remains to be seen if either player will develop that trust from Tortorella. Right now, there are obviously reasons to be skeptical about Laine in particular, a player who was benched by Tortorella in a manner similar to that of other stars before him, like Dubois and Vincent Lecavalier. But the other units of measure are a bit more encouraging.

Let’s first start with opportunity. Laine is still seeing a decent chunk of minutes in Columbus, but it’s Roslovic who has seen a significant uptick in deployment:

Roslovic was kept in very limited depth roles for most of his time in Winnipeg, but he’s being pushed into a more prominent position in Columbus. Laine, on the other hand, has seen his ice time regress closer to where it was in prior seasons, but there is an interesting split in the numbers there. His even-strength ice time is down considerably, but he’s been a frequent fixture on the Blue Jackets’ top power-play unit.

So far, we know opportunity won’t be an issue for either of the former Jets skaters. But how has Tortorella envisioned his lineup with both of these pieces in, and how might the quality of teammate component impact measures like shot generation and scoring?

Let’s put Roslovic and Laine’s teammates side by side, comparing their 2019-20 deployment in Winnipeg to what Tortorella has tried early in Columbus this season: 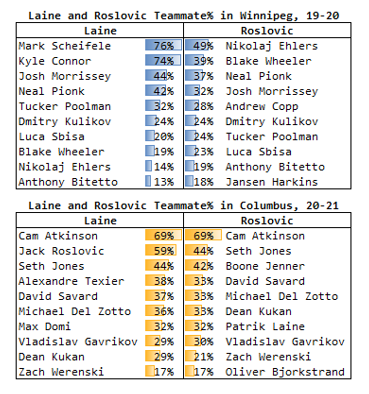 One of the noticeable components for Laine is that despite his frustration in Winnipeg about frequently playing on the team’s second line, he did end up playing a lion’s share of his even-strength minutes with Mark Scheifele and Kyle Connor last year – two highly capable attackers who are quite good when it comes to distributing the puck.

Laine will never be mistaken for a play driver or a skilled distributor of the puck, but you can count on one hand the number of forwards who are more gifted shooters. A lethal combination of speed and accuracy, Laine can be a very dangerous weapon with the right centre.

Laine has played predominantly top-six minutes early on in Columbus, seeing chunks of time with Cam Atkinson and Roslovic up front. From a purely offensive perspective, that’s a step down from where things were in Winnipeg, where Laine could play second (or even third) wheel.

Perhaps carrying more of the offensive burden is a good thing for Laine, and perhaps having quality defensive forwards on his line – to say nothing of the Seth Jones pairing behind him – will help minimize the off-puck, defensive-zone mistakes. But offensive production away from the power play may be a concern.

Roslovic, on the other hand, is a different story. Not only has he been given much more opportunity than in years past, he also may be playing more regularly with impact forwards.

Roslovic has spent his minutes with Atkinson and Boone Jenner. It’s true that Roslovic did get opportunity last year with similarly skilled players in Nikolaj Ehlers and Blake Wheeler, but Paul Maurice frequently pushed Roslovic back down the lineup, meaning a lot of checking-line minutes with depth forwards and third pairing defenders.

So, for fantasy owners curious as to how to take advantage of this trade, the answer may be the “other” piece in the deal. Dubois and Laine are the household names, but it’s Roslovic who is getting a bigger opportunity. In the fantasy world, where being able to differentiate between actual and perceived value is quite important, Roslovic is a strong option to target in the trade market right now.