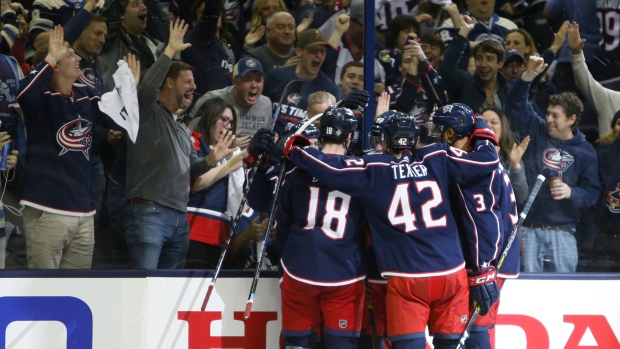 COLUMBUS, Ohio — Sergei Bobrovsky has the Columbus Blue Jackets on the brink of sweeping a playoff series that hardly anyone thought they could win.

The Russian goalie shut the door when the Tampa Bay Lightning made a desperate late surge on Sunday night, preserving a 3-1 win and giving Columbus a 3-0 lead in the best-of-seven Eastern Conference quarterfinal against the NHL's best team.

The Blue Jackets will try to finish the sweep — and win a playoff series for the first time in franchise history — in Game 4 at home on Tuesday night.

Matt Duchene, Oliver Bjorkstrand and Cam Atkinson scored, and Bobrovsky finished with 30 saves , 16 of them in the final period.

"You don't get to this time of year without a really good goalie to get in, and you don't win playoff games without your goalie, so I thought he stood really big in those 10, 12 minutes there where they turned it up," Columbus coach John Tortorella said. "Bob doesn't say anything. He just goes about his business. The way he prepares is second to none. We're going to need him, because there's going to be another push in Game 4."

Without their top scorer, the suspended Nikita Kucherov, and injured defenceman Victor Hedman, the Lightning, who finished with a league-best 62 wins, couldn't find any momentum until late, and then Bobrovsky rose to the challenge.

Columbus has commanded the series since falling behind 3-0 in the opening period of Game 1, only to rally to win that one 4-3. The Blue Jackets pummeled the Lightning 5-1 in Game 2, and solidly outplayed them for most of the game Sunday.

"The job's not done, but at the same time this is fun," Duchene said. "This has been unbelievable, and we want to finish the job and leave no doubt. Obviously, we have a great opportunity Tuesday at home in front of our fans. I think these fans deserve that we get the job done here at home."

The night was satisfying for Bobrovsky — he hasn't been great in the playoffs the last two seasons — and the Blue Jackets, who were 2-8 at Nationwide Arena in three previous post-season appearances. They are the only NHL team that hasn't won a playoff series.

"We don't have to overthink, we just have to enjoy tonight and prepare for another work get-together, work for each other and, yup, let's see what's going to happen," Bobrovsky said.

Ondrej Palat scored in the third period and Andre Vasilevskiy had 27 saves for the Lightning, who are facing an unexpected quick elimination.

Teams have come back from 3-0 deficit to win a playoff series on just four previous occasions. The last time was in 2014, when the Los Angeles Kings dug out of the hole in the opening series against San Jose and eventually won the Stanley Cup.

Lightning coach Jon Cooper took some solace in his team finally showing signs of getting its swagger back.

"As far as I know, we're playing Tuesday, so were still alive," he said.

After a scoreless first period, the Blue Jackets struck 1:44 into the second when Duchene was in the right place to score off a rebound . Bjorkstrand went over Vasilevskiy's head on a power play for a 2-0 Columbus lead at 8:25, with rookie Alexandre Texier picking up his first NHL assist.

Tampa Bay got on the board with Palat's goal in the third, but couldn't muster any more. Atkinson connected on an empty-netter with a minute left in the game.

NOTES: Kucherov was suspended for boarding Blue Jackets defenceman Markus Nutivaara in Game 2 on Friday. Nutivaara was out with an upper-body injury Sunday.... Columbus signed D Vladislav Gavrikov on Saturday but he's not cleared to play yet because his visa is pending. ... The Lightning's three shots in the first period were the fewest allowed in a period by the Blue Jackets in a home playoff game. ... The Blue Jackets last won a home playoff game on April 18, 2017. ... Columbus has scored four power-play goals in the series.

UP NEXT: Game 4 on Tuesday in Columbus.