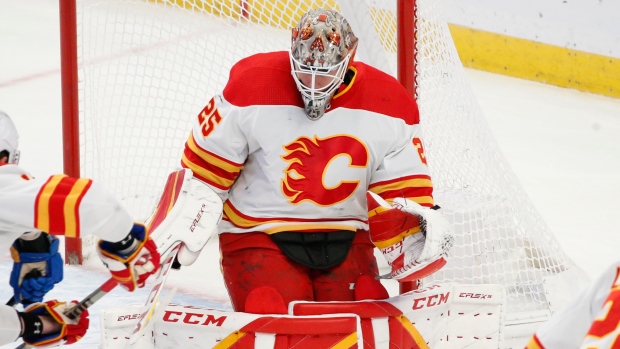 BUFFALO, N.Y. — Jacob Markstrom made 27 saves and Andrew Mangiapane and Johnny Gaudreau each had two goals and an assist for the Calgary Flames in a 5-0 win against the Buffalo Sabres on Thursday night.

Markstrom’s five shutouts in 13 starts lead the NHL and is a career high.

“He’s one of our leaders,” Flames coach Darryl Sutter said. “He’s one of our core guys. It’s not always easy to do that from that position, because guys are sort of on their island a little bit. But he brings a lot to the locker room.”

The Flames got a sixth shutout with backup Dan Vladar in net and are the first team with that many through the first 17 games since the Boston Bruins at the start of the 1938-39 season.

“That speaks to great goaltending we are getting,” said Matthew Tkachuk, who had a goal and two assists. “Even if they are letting in one or two, they are keeping us in games and getting us points. Especially recently. Both of our goalies have been unbelievable this year.”

Christopher Tanev added two assists as the Flames (9-3-5) improved to 2-1-2 on their seven-game road trip, with points in four straight.

This was the first shutout loss of the season for the Sabres (7-7-2), who have dropped seven of nine.

“An embarrassing effort at home and it’s not up to our standard,” Sabres forward Vinnie Hinostroza said. “You look around the room tonight, everyone is pretty rattled. I don’t think anyone played up to their potential.”

Dustin Tokarski stopped 18 of 23 shots before getting replaced for the third period by Aaron Dell, who made 10 saves. Tokarski was coming off a career-best 45 saves in Buffalo’s 2-1 win at Pittsburgh on Tuesday night.

“Dustin was not the issue,” Sabres coach Don Granato said. “In front of him was the issue.”

The Sabres drew boos from the home crowd after the Flames scored four goals in the second period — the last three coming on consecutive shots on net from Tkachuk, Mangiapane and Gaudreau in a 1:37 span.

Gaudreau set up Tkachuk for his eighth of the season with just over six minutes left in the period.

“We didn’t react competitively from that point,” Granato said. “And that tells me it was the whole mood of the night. The guys just didn’t feel themselves.”

Mangiapane followed up with his team-leading 12th goal, and Gaudreau scored on a power play 46 seconds later to make it 5-0.

Tanev fed Mangiapane for a backhand from the slot that bounced off Tokarski’s glove and gave Calgary a 2-0 lead less than two minutes into the second.

Gaudreau’s breakaway goal put the Flames in front midway through the first period. Skating past Buffalo defenseman Colin Miller to receive a stretch pass from Tkachuk across the blue line, Gaudreau lifted a shot into the top of the net for his fifth.

“We got off to an early lead, and didn’t really look back,” Tkachuk said.

Mangiapane has scored 11 goals on the road, moving ahead of Edmonton’s Leon Draisaitl for the NHL lead in that category. He joined Jarome Ignla (2009-10) as the only players in Flames history to score 11 goals in the first 11 road games of the season.

The 25-year-old Mangiapane is in his third season with the Flames, “and he’s still a very humble kid,” Tkachuk said. “Just kind of scratching the surface of what he can be, and starting to show the hockey world that he is one of the best in the NHL.”

NOTES: Markstrom became the 10th goaltender in NHL history to record five shutouts in 13 appearances or fewer. The last was Columbus’ Pascal Leclaire in nine games during the 2007-08 season. … Flames D Oliver Kylington extended his point streak to five games with an assist on Mangiapane’s first goal. He is one of three NHL players with multiple five-game point streaks this season. … Calgary is 9-1-2 against Eastern Conference opponents and 0-2-3 within the Western Conference.

Flames: Conclude longest trip of the season Saturday and Sunday with back-to-back games against the New York Islanders and Boston Bruins.