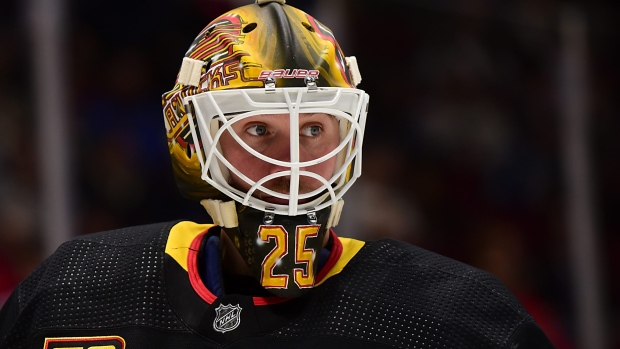 As negotiations continue between the National Hockey League and NHLPA on scheduling for a season that could start in early January 2021, a contingent of Calgary Flames players from Europe – headlined by prized free-agent signing Jacob Markstrom – has just returned to the city and are now quarantining.

Upon their arrivals at Calgary International Airport, the players were immediately tested for COVID-19, the results of which will come within the next couple of days.

In addition to the airport tests, the team will administer its own COVID-19 tests on the players. Should they pass, the players will be allowed to leave quarantine.

They’ll then be able to practise and train in small groups at the Saddledome under regulations set forth by the league and Alberta Health Services. According to the Flames, the earliest that they can begin training and skating is likely Dec. 11.

A number of those rules focus on testing, spacing, and personnel limitations. Players’ temperatures will be taken upon their arrival to team facilities. Up to six players are allowed in the weight room and 12 players on the ice at the same time.

For the past few weeks, seven Flames already in Calgary have been skating and training regularly in small cohorts at the Saddledome.

With the arrivals of Markstrom, Lindholm, Nordstrom, and Simon, 11 Flames who are expected to earn roster spots are in Calgary right now.

The team isn’t yet sure of when those players will return to Calgary.

While no official announcement on a season has been made yet, Flames head coach Geoff Ward told TSN in November that his approach is there will be games in the new year.

“The league is definitely saying that there will be a season,” he said at the time. “So as a coach and as coaches of our team, our staff is doing an awful lot of work to make sure we’re prepared. Right now, we’re preparing as though it’s going to be January 1 until we hear otherwise.”