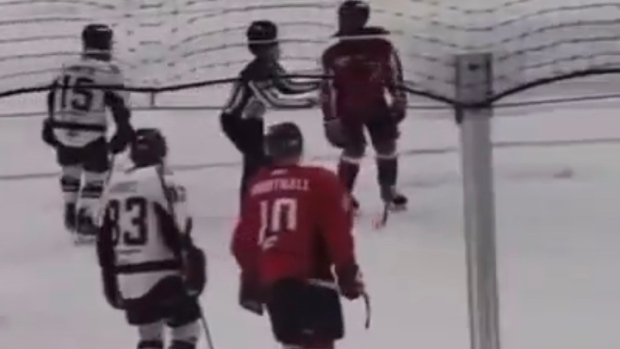 Gesture made against Jordan Subban in ECHL ,

Jacob Panetta claims he was making a “tough guy” pose at South Carolina Stingrays defenceman Jordan Subban on Saturday night, apologizing for a taunt he says was misinterpreted as a racial gesture as the ECHL continues to investigate the incident.

“I heard him in the hallway and I kind of clued in that it was perceived like that and he took it that way,” Panetta told Michael Traikos of Postmedia in an interview on Monday. “I was kind of in shock. It’s not my character. It’s not what I intended. That thought never crossed my mind.

Panetta also issued a statement on Sunday night, apologizing to Subban and saying he would “fully participate” in the ECHL’s investigation. The league suspended the Jacksonville Icemen defenceman indefinitely earlier in the day, pending a hearing.

Subban called attention to the gesture made to him on Saturday night, quote tweeting a game tweet from the Icemen saying that the overtime period between both teams featured “a rough fight resulting in multiple penalties on both sides.”

"More like @JPanetta12 was too much of a coward to fight me and as soon as I began to turn my back he started making monkey gestures at me so I punched him in the face multiple times and he turtled like the coward he is. There fixed it," he tweeted.

"They don’t call the east coast league the jungle because my brother and the other black players are the monkeys!" the elder Subban wrote on Instagram. "Hey @jacobpanetta you shouldn't be so quick to delete your Twitter or your Instagram account you will probably be able to play again… that’s what history says but things are changing. now not just the hockey world knows your true colours… your hometown of Belleville knows, your family, and friends know you're a fraud ...with everything that has gone on in the past couple years in the world I’ll say with all due respect to everyone who has an opinion, this isn't a mistake. We all know what's ok and what's not. Even your own teammates wanted to see you get your clock cleaned. This happens a lot and it never gets exposed in the lower leagues. One thing that I love about this is Jordan’s teammates standing in there and showing support. Love that."

The Icemen announced on Sunday that they were releasing Panetta and are co-operating with the league's review of the incident.

“I’m sure it’s caused a lot of mental and emotional damage to Jordan and his family. It’s something that I’m sincerely sorry for,” Panetta told Postmedia. “I just want to emphasize again that I’m sorry that he viewed it that way and I’m sorry for all the anger and hurt I’ve caused him and anyone else in the [arena] or anyone that’s had a chance to view it on social media.”

@jordansubban this is the video I was referring to. You were not with South Carolina at the time and I was seen making the same gestures to non racialized players. Again my sincerest apologies to you and your family. pic.twitter.com/EgSLZuBgHn

Files from Postmedia were used for this story.