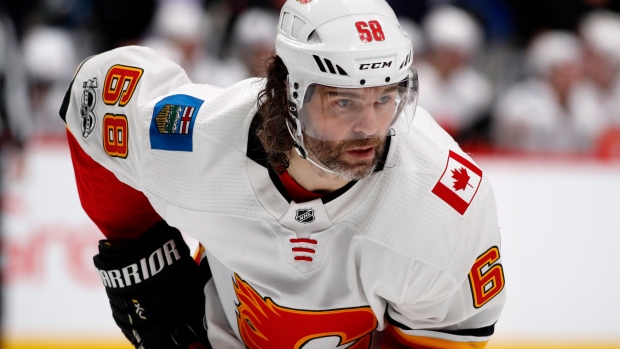 Jaromir Jagr's storied NHL career appears to be at an end.

After Jagr cleared waivers, the Calgary Flames announced the 45-year-old Czech legend was assigned to his hometown club, HC Kladno of the Czech 1. Liga. Jagr is a co-owner of the club and skated with the team before signing with the Flames in October.

"I want to thank Brad Treliving and the Calgary Flames for giving me the immense opportunity to be a part of their team and continue my NHL career this season,” Jagr said in a statement. “Although I am very disappointed that things did not turn out as we had hoped due to a number of circumstances, I am deeply grateful to the Flames, the fans and the City of Calgary for having welcomed me so generously. I now look forward to continuing the season in Kladno."

Jagr has appeared in 22 contests for the Flames this season, posting one goal and six assists. He was placed on injured reserve with a lower-body injury on Jan. 14, retroactive to Dec. 31 when he last played.

“Jaromir’s career speaks for itself,” said Treliving. “He is a legend in our sport and we are very appreciative that he selected Calgary to pursue his career in the NHL. Regretfully, with a late start to his season combined with nagging injuries, he wasn’t in a position to perform at the level both he and our team had hoped. During his short time in Calgary, Jaromir demonstrated tremendous leadership and professionalism, especially with our young players. We thank him for his contributions to our group both on and off the ice.”

"He's really made our team better. The way his mindset was and the way he approached things, the way he saw the game," head coach Glen Gulutzan said.

There was speculation previously that Jagr could dress for the Czech Republic in next month's Olympics in Pyeongchang, but he was not released in time or named to the roster.

The native of Kladno is the NHL’s active leader in goals (766) and assists (1,155) and his 1,921 points are second all-time behind only Wayne Gretzky.