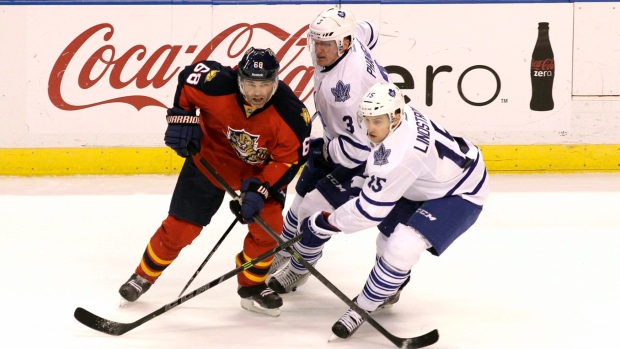 SUNRISE, Fla. - Jaromir Jagr got the Florida Panthers' off-season off to a flying start.

And even after they missed the playoffs for the 13th time in 14 years, it's easy to see why the Panthers are so optimistic about their future.

Jagr signed a one-year, $3.5 million contract Sunday to stay with Florida, saying he felt revitalized in his 20 games after the trade to the Panthers in February. Keeping the future Hall of Famer was a top priority for the club, and Jagr didn't see any need to wait.

"He's a great role model for our guys," general manager Dale Tallon said. "It's a great day for our franchise having a superstar in the fold like that."

The 43-year-old Jagr has 722 goals and 1,080 assists in his career. His 1,802 points are fourth-best in NHL history, behind only Wayne Gretzky, Mark Messier and Gordie Howe. Florida put him on a line with budding stars Aleksander Barkov and Jonathan Huberdeau — guys basically half his age — and they immediately clicked.

"I'm glad I got traded here," he said. "I didn't know how good this team is and how good the organization is. Thankful I had a chance to play the last 20 games here. A lot of people thought I was done, but those young guys give me extra energy, extra life."

So while it might sound like the same old story — the Panthers missing the playoffs — it truly seems to have a different feel this time.

They improved by 25 points in the standings over a year ago. They have a young core of talent that's now proven, an elite goalie in Roberto Luongo and now Jagr back.

So even without a playoff trip, the Panthers insist there's a lot to like.

"We're not happy. We'd like to not be in this position today," Huberdeau said when the team gathered for exit meetings and the locker-room cleanout session, shortly before the Jagr deal was announced.

Huberdeau led Florida with 54 points, nearly matching the total from his first two seasons combined. Nick Bjugstad had a team-best 24 goals and rookie Aaron Ekblad posted 39 points — the sixth defenceman in franchise history with that many.

Average age of those three players: 21.

"We're a young team," coach Gerard Gallant said. "Sure, we've got some older, veteran guys. But we've got a lot of young hockey players that are making our team into contenders."

There are also the older guys, such as Luongo, Jagr and Willie Mitchell — all of whom believe the future is bright and the playoffs close for Florida.

Luongo, who turned 36 earlier this month, actually lowered his career goals-against average (2.35) and save percentage (92.1) this season. Mitchell mentored on and off the ice, even having Ekblad live with him and his family. And Jagr is already a fan favourite, in a market where hockey is still trying to grow.

If there was a breakout player, it was Brandon Pirri — in one of the most statistically odd years in NHL history.

Pirri finished with 22 goals and two assists in 49 games. The only other time someone had at least 22 goals and no more than two assists was Cy Dennehy (22-1-23) for Ottawa in 1923-24. But the Panthers were hardly complaining about the unusual stat line.

"Somebody's got to put the puck in the net," Gallant said. "I'll take it anytime."

This has been Tallon's vision for a while: build depth through the draft, find the right marriage of veterans and youth, then turn it into a winning product. Organizationally, the depth is evident now. The Panthers' minor league team is solid, and there are no longer glaring holes in the roster.

He made Jagr a believer, and fast.

"This team's got a big future," Jagr said. "Hopefully I can be part of it."