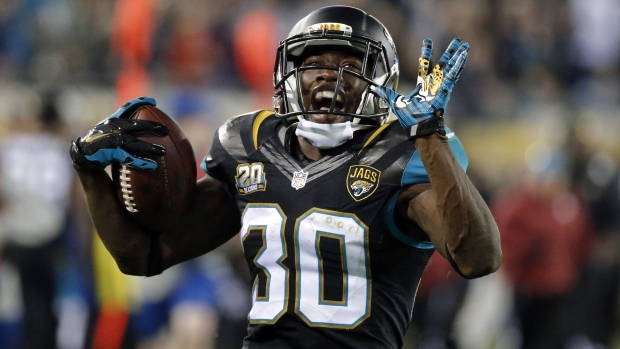 JACKSONVILLE, Fla. - Blake Bortles revived a stagnant offence. Jordan Todman provided some cushion. And Sen'Derrick Marks sealed it with the most rewarding sack of his career.

The trio provided all the highlights in the Jacksonville Jaguars' 21-13 victory over the Tennessee Titans on Thursday night.

In a matchup that was widely billed as unwatchable, Bortles, Todman and Marks offered some compelling moments in a relatively meaningless game.

"The neat thing about this was different guys stood up at different times," Jaguars coach Gus Bradley said.

Bortles completed 13 of 26 passes for 115 yards and a touchdown, a 4-yard pass to Marcedes Lewis that got Jacksonville going late in the second quarter. He also ran for 50 yards playing with a sprained right foot.

"I wasn't going out there if I couldn't move around and help the offence," Bortles said.

Todman's 62-yard run put the Jaguars ahead for good. He juked one defender and stiff-armed another in his first carry of the night, ending his first score of the season with a leap into the stands.

Marks' play, though, got the most attention.

With the Titans driving, Marks sacked Charlie Whitehurst on the final play. It gave him 8 1/2 sacks on the season, triggering a $600,000 bonus in his contract.

"What a great way to end the night," Bradley said.

Marks stood up and starting rubbing his fingers together before getting mobbed by teammates near midfield.

The Jaguars (3-12) won for the second time in four weeks thanks to a rejuvenated offence that had scored just two touchdowns in the previous four games. Playing the Titans (2-13) surely aided the effort.

Tennessee lost its ninth consecutive game and moved a step closer to securing the No. 1 draft pick.

"It was more about mistakes that we made than anything else because when we did it right — as you can see by most of the first half — we played pretty good," Titans coach Ken Whisenhunt said.

The Jaguars had only 16 yards of offence until Bortles led them on an 80-yard drive at the end of the first half, ending it with the jump ball to Lewis in the left corner of the end zone.

The Jaguars got the ball to start the second half, and Bortles found Marquise Lee on a 34-yard catch-and-run on third-and 7. After two more completions, Jacksonville went to some trickery with a backward to Cecil Shorts III, who then threw across the field to Todman to the 9.

It looked as if Jacksonville would have to settle for a tying field when Bortles was flushed from the pocket and scrambled down the sideline to the 2 on third-and-goal. But linebacker Avery Williamson was called for holding Lewis away from the play, giving the Jaguars new life. Toby Gerhart punched it in from the 1 on the next play.

The turnaround for the Jaguars was surprising. Losers of seven of their last eight games, the Jaguars had only two offensive touchdowns in their previous 46 drives over four games and nearly two quarters, and just like that, Bortles took them down the field for touchdowns on consecutive drives.

That was a bright spot in a game otherwise devoid of them early.

For the final NFL game on Thursday night this year, about the only thing at stake was the inside track for the No. 1 pick, and likely a slightly easier schedule. In this case, the loser had more to gain.

The Titans were led by third-stringer Whitehurst, who was replacing Zach Mettenberger. Whitehurst couldn't miss at the start, and for the first time this year, the Titans scored a touchdown on their opening possession.

But things turned from there, with Bortles, Todman and Marks providing the big plays.

"It was a great feeling," Todman said. "You're looking up at the scoreboard just hoping you don't get caught from behind. It was a great call. The line did a good job. I made a guy miss and then it was off to the races. It was just what we needed — just what I needed."

Notes: The Jaguars gave up four sacks, giving them 66 for the season and breaking the franchise record of 63 set in 2001. Jacksonville has allowed at least four sacks in six consecutive games. ... Jaguars RB Toby Gerhart left the game with bruised ribs, tried to return and then sat out for good late. He finished with 53 yards on 12 carries. ... Titans defensive co-ordinator Ray Horton was on the sideline for the first time this season. ... After NFL observers complained and maybe threatened a fine, Jaguars LB J.T. Thomas removed his teal-tinted visor at halftime.