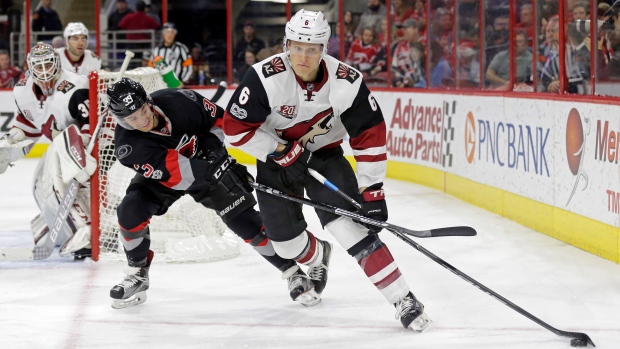 Jakob Chychrun's lower-body injury is not serious as originally feared and there's still a "strong chance" the Arizona Coyotes defenceman will be traded before the deadline, TSN Hockey Insider Darren Dreger reports.

While Chychrun was initially expected to miss two-to-four weeks with the injury, he could be back on the ice as soon as later this week. Dreger reports the Los Angeles Kings and Boston Bruins are committed to staying in the hunt for the 23-year-old with "multiple-piece offers."

TSN Hockey Insider Pierre LeBrun reports the Bruins have shown interest in other defenceman such as the since-traded Josh Manson and Hampus Lindholm of the Anaheim Ducks but acquiring Chychrun in a 'hockey deal' has remainder a priority for the team.

Bruins showed some interest in Josh Manson before he was dealt, believe they've shown interest in Hampus Lindholm as well among other D. But a hockey deal for Chychrun has always been of interest to the B's if possible. Getting more of a read on the injury key here for Boston. https://t.co/OY8g43lDxl

Chychrun, who has seven goals and 14 assists in 47 games this season, was injured in Saturday's loss to Boston.

Signed for three more seasons at an affordable $4.6 million cap hit, Chychrun sits No. 1 on the TSN Trade Bait board ahead of the March 21 deadline.