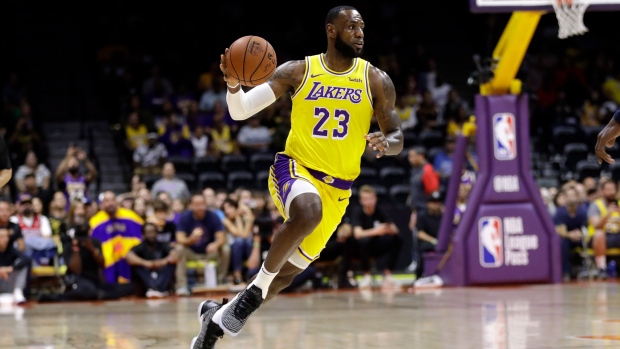 SAN DIEGO — LeBron James rubbed his hands in chalk powder at the scorer's table, yelled "Yes!" to ecstatic fans in the first few rows and the Los Angeles Lakers' new era was underway.

Playing in the same arena where Magic Johnson made his regular-season debut for Los Angeles 39 years ago, James captivated the crowd from the start of the Lakers' exhibition opener Sunday night, a 124-107 loss to the Denver Nuggets.

The opening tip came James' way and he tapped it to fellow newcomer Rajon Rondo, who threw an alley-oop pass to JaVale McGee for the game's first score.

James missed his first shot, a turnaround fadeaway, but then made a no-look bounce pass from about 27 feet out to Brandon Ingram for a dunk. A minute later, James hit a long 3-pointer.

He finished with nine points, three rebounds and four assists in just more than 15 minutes.

"It was great to get back on the floor and then just start a new journey for myself and hear the Lakers fans that we have here in San Diego," said James, who was married here in 2013. "It was great feeling to go out there and hear the roar from the fans here. I very much appreciate it."

The three-time NBA champion, four-time NBA MVP and 14-time All-Star said he played a little more than expected, "and I felt pretty good."

Seeing James in a Lakers uniform for the first time "was awesome," said coach Luke Walton, who grew up in San Diego. "When you're coaching the Lakers and you look out and see LeBron wearing your team's colours, it' a pretty good feeling."

While the Lakers have a lot to work on, fans hope James' arrival will turn things around after the worst half-decade in the franchise's lengthy history.

He left the Cleveland Cavaliers for a four-year, $153.3 million free-agent deal with the Lakers.

He, Rondo and fellow veterans McGee, Lance Stephenson and Michael Beasley signed to team with the Lakers' talented young core.

James was the focus on and off the court Sunday night.

He was cheered from the minute he ran onto the court with his new teammates for warmups. He played the first eight minutes before being subbed out.

When he came back in midway through the second quarter, he was greeted by a roar.

As he stood near the scorer's table during a video review, a fan yelled: "LeBron, we love you!" and the superstar responded with a hang-loose sign.

Walton said James and Rondo "were great. Their commitment to pushing it, defensively. I thought the first group as a whole played really well, to start. Both groups were fouling way too much. They hit 30-some free throws. It's going to be tough to win a game like that. But there's some new rules we have to get adjusted to from this summer. The first group I thought played really well, obviously being led by the two of them out there."

The Lakers' regular-season opener is Oct. 18 at Portland. Their home opener is two nights later against Houston.

This was another big night for an L.A. basketball team at San Diego's sports arena.

In 1975, John Wooden coached his final game here, leading UCLA to its 10th NCAA title in 12 seasons. In 1979, Johnson made his NBA debut when Los Angeles beat the then-San Diego Clippers in the season opener. After Kareem Abdul-Jabbar made a buzzer-beating sky hook, Johnson hugged the centre like they'd just won the championship. Seven months later, they did win the NBA title.

Johnson is now the Lakers' president of basketball operations and James was the prized acquisition of an off-season roster revamp.

As a kid, Walton used to watch his father, Bill, play for the Clippers, although the Hall of Famer's years in his hometown were largely marred by injuries.