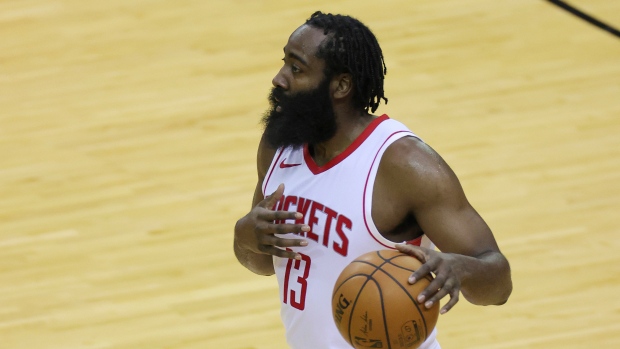 Houston Rockets head coach Stephen Silas said Wednesday it was in the team's best interest for James Harden "not to come to practice," as The Athletic's Shams Charania reports the team is evaluating trade options for the All-Star guard.

Charania reported a trade could culminate quickly as the Rockets are sifting through options from the finalists, the Brooklyn Nets and Philadelphia 76ers. Charania added the Nets are preparing an offer of all their future first-round picks and pick swaps.

The Rockets are sifting through finalists — Nets and 76ers — for a James Harden deal that could culminate quickly, with Brooklyn preparing an offer of all its future first-round picks and pick swaps, per sources.

Story on @TheAthletic with @sam_amick: https://t.co/tTYIRVG8Xg

Rumours surrounding Harden’s desire to move on from the Rockets began to surface following the end of the 2020 NBA playoffs, where the Rockets were eliminated by the Los Angeles Lakers four games to one in the Western Conference semifinals.

Harden reported late to training camp in December amid reports that he was hoping to be dealt.

Houston is increasingly determined to complete a James Harden trade as soon as today, league sources say, and has chased the promising Maxey in addition to Simmons

Tension between Harden and the Rockets, who started out the 2020-21 season 3-6, appeared to boil over following the teams’ double-digit loss to the Lakers on Jan. 12. Following the loss, Harden strongly expressed his frustration during his post-game availability.

"I love this city. I literally have done everything that I can. I mean, this situation is crazy. It’s something that I don’t think can be fixed," Harden told reporters before leaving the post-game news conference.

Harden, who is currently in the midst of his 12th season in the NBA, joined the Rockets via a trade with the Oklahoma City Thunder ahead of the 2012-13 campaign. After excelling as a reserve with the Thunder for the first three seasons of his career, Harden quickly turned into a full-blown star with the Rockets.

Harden, the NBA’s top scorer the past three seasons, has eight all-star selections under his belt and was also the NBA’s 2018 MVP. He is averaging 24.8 points, 10.4 assists and 5.1 rebounds this season and owns career totals of 25.2 points, 6.3 assists and 5.3 rebounds.