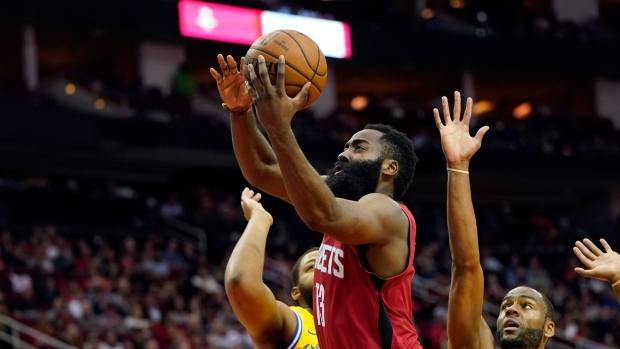 HOUSTON — Despite an entirely different lineup of Golden State Warriors, James Harden was still out for blood Wednesday night.

Harden had 36 points and 13 assists and the Houston Rockets routed Golden State 129-112, sending the short-handed Warriors to their sixth loss in eight games this season.

Less than six months ago, a vastly different roster of Warriors ended another Houston playoff run for the third time in four seasons.

"That's a part of the league," Harden said about the changing faces. "It's a part of the NBA. There's been a lot of different faces since I've been here. It was bound to happen at some point and it is what it is."

Harden again appeared to be moving past his early shooting woes, going 6 of 16 from 3-point range. Since going 17 of 79 on 3s in his first six games, Harden has made 13 of 32 the last two.

Harden's 292 points through the first eight games (36.5 points per game) mark the highest point total through eight games since Michael Jordan had 303 in 1988-89.

Russell Westbrook had 18 points, eight rebounds and six assists. P.J. Tucker had 22 points and 11 rebounds, Clint Capela added 19 points and 16 rebounds, and Austin Rivers was 4 for 4 from 3 with 12 points.

The rookie Paschall was challenged with guarding Harden for much of the game.

"It's just hard because he's so dynamic and he's a great passer," Paschall said. "And during his (isolation plays), you can't really touch him because he's so smart on how he draws the fouls. As a team, we did a good job in the first half, but then he got hot and started hitting 3s."

Golden State fell to 2-6 for the first time in eight years.

Both teams struggled with their shooting for spurts of the first half, but late in the second quarter, Harden drilled a deep 3-pointer where he was also fouled. That shot fired up both Harden and the Toyota Center crowd, including rapper Travis Scott, who was sitting courtside.

Houston led 63-52 at the half, thanks in large part to Harden's 24 first-half points, but also Golden State's 38.8% shooting from the field.

There were seven lead changes in the first half before Houston started to pull away.

To open up the second half, the Rockets held the Warriors to just three field goals in the first seven minutes of the third quarter and built a lead as large as 23 points. They entered the fourth quarter leading 98-83.

Warriors: C Kevon Looney will likely miss at least the next two weeks with a nerve condition that has kept him out the last six games, the Warriors said. Looney missed the entire preseason with a strained right hamstring and exited the second half of the season opener with tightness in the hamstring.

"It is strange. We were in this building not too long ago with a huge game. We're entirely different. I don't think we have a single player from that night that's going to play tonight. Houston is different, too, with the trade with Chris (Paul) for Russell (Westbrook). Everything's very different. It's early in the season, and everybody is trying to figure out what's what." — Warriors coach Steve Kerr on playing at the Toyota Center less than six months removed from a series-winning Game 6 victory in the Western Conference semifinals.

D'Antoni said some of Houston's early struggles have been related to issues with conditioning. He took part of the blame for saving his players' legs in the preseason and limiting practices but said he believes the shooting, the energy and the defence will improve once the conditioning comes around. Harden said the conditioning is a work in progress.

Rockets SF Danuel House Jr. had a season-high 17 points while shooting 5 of 6 from 3-point range. House has scored 15 or more points in four of the past five games. The Rockets are 12-3 when House scores 15 or more points.

Warriors: At Minnesota on Friday night.

Rockets: At Chicago on Saturday night.