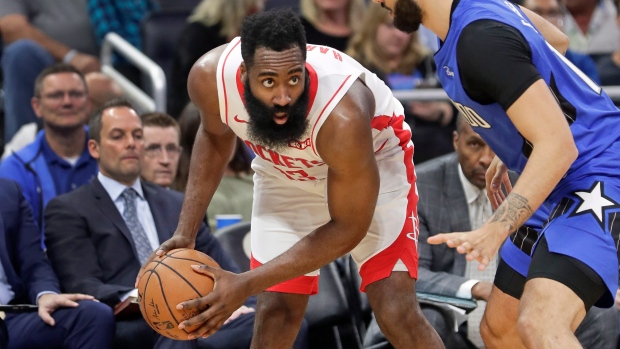 Harden scored 54 points, matching the team record of 10 3-pointers he set in Houston's last game in the Rockets' 130-107 victory over the Orlando Magic on Friday night.

“I just want to win,” Harden said simply. “Whatever it takes."

Harden scored 50 or more for the fifth time this season and the fourth time in his last seven games. The rest of the NBA has combined for only five such games this season.

Harden was 10 of 15 from long range and 19 of 31 overall from the field. He also had a seven assists, five rebounds and two steals in 36 minutes, receiving a loud ovation from the Orlando crowd when he headed to the bench in the final minutes.

“I feel like we lost against just him tonight,” Magic guard Evan Fournier said. “He's the MVP for a reason. We talked about in pregame that he'll take shots, and we'll just live with the results. He did not miss tonight, period.”

Harden set the Houston record for 3-pointers with 10 in 18 attempts Wednesday night in a 55-point game in a victory at Cleveland.

“When he's shooting over the top like that, I don't know what you can do,” Orlando coach Steve Clifford said.

Russell Westbrook added 23 points for Houston. The Rockets were 22 of 39 from 3-point range, setting a record for the most 3-pointers by any Magic opponent in franchise history.

“We just shot the ball extremely well,” Rockets coach Mike D’Antoni said. “When James is like that, it’s hard for anybody to really beat us … no matter what kind of defence you’re going to throw, we’ve got guys.”

The Rockets pulled away in the second quarter, with Harden scoring 18 points, including Houston's last 11 for a 59-49 lead.

Fournier led Orlando with 27 points. Aaron Gordon added 21. The Magic have lost three straight after winning four in a row.

Rockets: Beat the Magic for the 12th time in the last 15 meetings. … Holds four of the top five spots for most made 3-pointers by a team this season … D’Antoni said he assumes his team will play Saturday without Westbrook, who sat out the second game of both of Houston’s previous back-to-backs this season ...

Magic: Orlando was without C Nikola Vucevic for the 11th consecutive game because of a right ankle injury. … G Markelle Fultz returned after missing Wednesday’s game against the Los Angeles Lakers with a stomach virus. … The Magic held their annual charity golf tournament Thursday to benefit the Orlando Magic Youth Foundation. More than $200,000 was raised.

Magic: At New Orleans on Sunday.