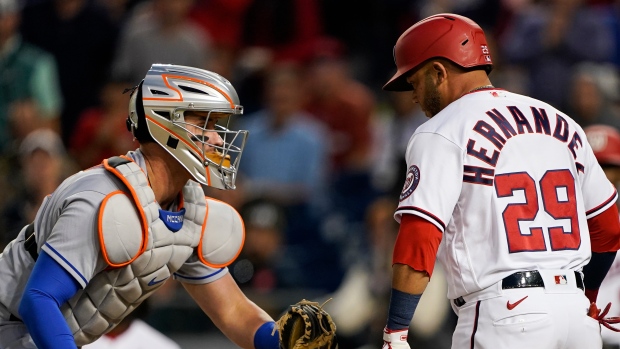 NEW YORK (AP) — New York Mets catcher James McCann will be sidelined for approximately six weeks after he broke a bone in his left wrist.

McCann needs surgery to repair his broken left hamate bone. He missed the final two games of this week's series at Washingon with what was described as a sore left wrist.

New York manager Buck Showalter said the team sent McCann for a scan at 7 a.m. Friday morning “to be on the safe side, make sure we knew what we were dealing with, just a precautionary thing.”

The 31-year-old McCann was placed on the 10-day injured list, and Tomás Nido takes over as the starting catcher. Patrick Mazeika was recalled from Triple-A Syracuse to back up Nido and may start Saturday.

New York is off to a 22-11 start, matching the Los Angeles Dodgers for best record in the National League, despite injuries to ace Jacob deGrom (right scapula) and relievers Sean Reid-Foley (Tommy John surgery) and Trevor May (right triceps inflammation).

“Harmony is not the absence of problems, it’s just the ability to deal with them,” Mets manager Buck Showalter said. “Nobody cares.”

Showalter said the Mets had not detected how the injury occurred, whether on a swing, foul tip or possible catcher's interference.

In his second season with the Mets, McCann is hitting .196 with one homer and six RBIs in 21 games.

“He’s been taking a lot of extra work in BP trying to get his swing going,” Showalter said. “I was expecting him to catch today going into the train ride last night.”