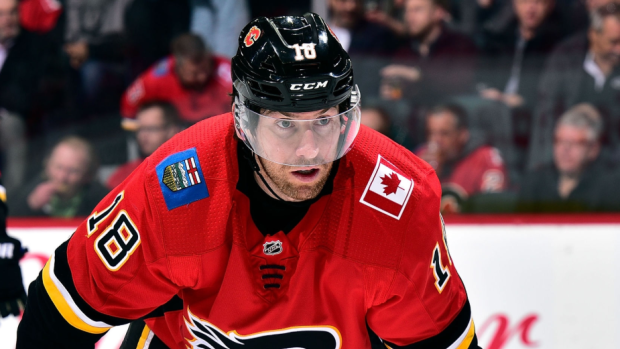 James Neal is hopeful he'll get the opportunity to skate alongside Edmonton Oilers captain Connor McDavid this season as he looks to bounce back from career-low totals with the Calgary Flames.

Neal, who was traded to the Oilers on Friday for Milan Lucic, has been working out alongside McDavid this off-season under the direction of former NHL forward Gary Roberts.

“I see Connor every day, he’s the best, couldn’t ask for a better captain or guy," Neal said, per the Edmonton Sun. "Every day he comes in and does his work. Being able to work out with him and skate with him is awesome. If I get a chance to play with him now that would be great, the way he dishes the puck fits my style.”

Neal, who signed a five-year, $28 million contract with the Flames last July, scored seven goals and posted 19 points in 63 games this past season. It was the first time in his 11-year NHL career he failed to top 20 goals in a season.

“Last year was a tough year, obviously you blame yourself," Neal said. "You try to fix your game and come back stronger.”

Oilers general manager Ken Holland said Friday that head coach Dave Tippett will ultimately set the team's lineup, but he appeared to hint that Neal will have a top-six role.

“I can go to the record book and see James has built up a resume,” Holland said. “I looked at the resume and then I looked at the opportunity on our hockey club. I don’t know how Dave Tippett is going to play Connor, Leon (Draisaitl) and (Ryan) Nugent-Hopkins but ultimately two of those guys are going to be our top-two centremen. Any of those three has the ability to create scoring opportunities for their linemates.”