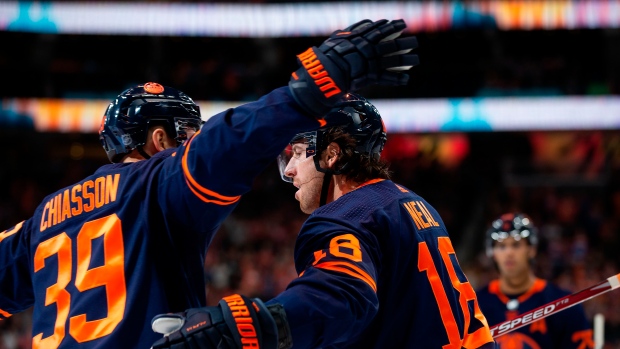 EDMONTON — James Neal may be leading the NHL in scoring, but it's Ethan Bear that impressed Edmonton Oilers coach Dave Tippett on Friday night.

Neal and Bear both scored as the Oilers moved back into sole possession of first place overall in the NHL with a 2-1 victory over the Detroit Red Wings on Friday.

Darnell Nurse had a pair of assists for the Oilers, who improved to 7-1-0. Bear scored for the second time in as many games, playing in just his 26th career NHL game.

"The goals are nice, but he is playing a lot of really hard minutes," said Tippett. "He is giving us real quality minutes on both sides of the puck. We need him right now with (Adam) Larsson out. He has come in and really filled the void for us. He was a surprise in camp and now he is a good NHL player right now."

Edmonton has also had some solid goaltending in its hot start to the season, including a 25-save performance from Mikko Koskinen on Friday. He improved his record to 4-0.

"The main thing for myself is I put everything out there this summer and that builds confidence," said Koskinen, who added that already having last season under his belt has better prepared him for this year. "It really helps a lot. I started from zero. It really helped a lot. I practised all summer in a small rink and I was more ready this year."

Mike Green replied for the Red Wings (3-5-0), who have lost four games in a row. Jonathan Bernier stopped 35 shots in net for Detroit.

"I thought we played pretty good today, just some chances didn't go in, we hit the crossbar at the end," said Detroit's Tyler Bertuzzi. "We had a good third and we tried our hardest. We dug in, got it deep and played simple in the third, we just didn't get rewarded."

Neal scored eight minutes into the second period when a long rebound came out to him and he put it into the net for his league-leading ninth goal of the season.

With the goal in just Edmonton's eighth game, Neal has already surpassed the seven he had in all of last season with the Calgary Flames.

Bear scored on a long point shot four minutes later for a 2-0 Oilers lead. Leon Draisaitl picked up an assist, giving him at least a point in every game thus far this season for Edmonton.

Detroit clawed back with a goal with just over three minutes left in the second as Green scored his first of the season on a shot through traffic.

The Red Wings had some heavy pressure late in the game but couldn't get the equalizer in the scoreless third period, one which saw Connor McDavid hit a post on an empty-net attempt in the final minute to go scoreless on the night.

The Oilers hit the road to play the Winnipeg Jets on Sunday, while the Red Wings are off until Tuesday when they return home to face the Vancouver Canucks.

Notes: The Red Wings came into the contest having allowed five goals in each of their three previous games, having been outscored 15-4 in those three defeats after a 3-1-0 start to the season… Oilers general manager Ken Holland faced his long-time former team for the first time since being hired by Edmonton on May 7… The Oilers wore their new third jerseys for the first time in the game.