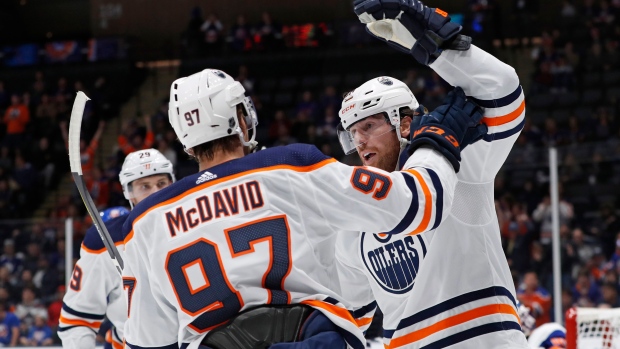 UNIONDALE, N.Y. — After a rough season in Calgary, James Neal has rediscovered his scoring touch with the Edmonton Oilers.

Neal had his first career four-goal game and the Oilers beat the New York Islanders 5-2 on Tuesday night.

Neal has six goals this season, all in the last two games, after totalling seven in 63 games with the Flames a year ago.

"I've scored (goals) my whole career," said Neal, a perennial 20-goal scorer who joined the Oilers in an off-season trade that sent Milan Lucic to Calgary. "Last year was a tough year and I wanted a chance to prove myself. ... I came here and had people that believed in me and believed that I could bounce back."

Neal scored twice in the Oilers' 6-5 over Los Angeles on Saturday night, and doubled that output against the Islanders.

"It's definitely pretty cool to have six goals in three games," he said. "It's a nice feeling."

Anthony Beauvillier and Matt Martin scored for the Islanders. Semyon Varlamov started and was pulled in the second period after giving up four goals on 19 shots. Thomas Greiss came on and stopped seven of the eight shots he faced.

"I think we were looking for an easy game, and I'm disappointed with that that because we knew it wasn't going to be," Islanders coach Barry Trotz said. "Too many turnovers, too soft on the battle and (we) took too many penalties."

Beauvillier got the Islanders on the scoreboard first with a short-handed goal late in the opening period. Edmonton scored twice in the final 2:07 of the first to take the lead, and then padded it with two more in the second.

"It's the best game we've played so far," Oilers coach Dave Tippett said. "More towards the team game we're looking for. We worked hard, managed the puck pretty well most of the time. Discipline was pretty good, power play was pretty good."

With the Islanders trailing 2-1 after 20 minutes, Beauvillier nearly tied it three minutes into the middle period, but his shot was stopped by Koskinen.

Beauvillier was sent to the penalty box for cross-checking Darnell Nurse after Nurse had a hard hit on Leo Komarov, and the Oilers took advantage with their second power-play goal of the night. Neal completed his seventh career hat trick as he tipped in a pass from Draisaitl from the left side for his fifth of the season at 6:31 for a two-goal lead.

Edmonton pushed the lead to 4-1 just 2:15 later as Kassian tipped a pass by Draisaitl past Varlamov for his third of the season, ending Varlamov's night.

New York stepped up the pressure with some of its best chances of the game, but Koskinen stopped a slap shot by Ryan Pulock with 7:17 left in the period. A minute later, he turned away attempts by Adam Pelech, Pulock and Jordan Eberle 17 seconds apart.

Neal finished off his big night at 6:51 of the third for his sixth of the season to make it 5-1.

"You know he's capable of scoring, but I don't think anybody envisioned getting off to a start like this," Tippett said. "He put the work in. It's good to see he's getting rewarded."

Martin scored with 6:28 left, tipping a pass from rookie defenceman Noah Dobson in his NHL debut.

The Islanders got the first four shots on goal of the game before the Oilers got their first, 7 1/2 minutes in. Edmonton held New York to just two more shots the rest of the period and finished the first with a 13-6 edge.

Beauvillier gave the Islanders the lead with 5:46 to go in the opening period, and Neal tied it with 2:07 left as he beat Varlamov from the right point.

Neal then put Edmonton ahead with a power-play goal after the Islanders' Brock Nelson was whistled for a double-minor for high-sticking. Neal, standing to the right side of the net in front of the goal line, got a pass from McDavid and quickly put it past Varlamov with 30.3 seconds to go in the first.

Islanders: At Carolina on Friday night.