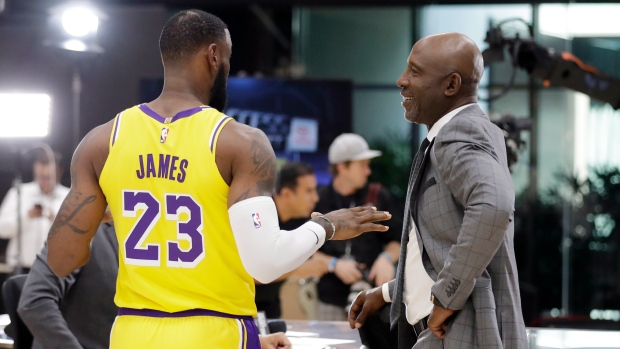 The 61-year-old Worthy appeared on Detroit radio station 97.1 The Ticket's Stoney & Jansen with Heather show where he decried the modern game's reliance on three-pointers and players leaving college too soon.

"Kareem had four years with John Wooden [at UCLA], Michael Jordan and I had three years with Dean Smith [at North Carolina], Isiah [Thomas] had some years with Bobby Knight [at Indiana], so you learned the fundamentals," Worthy said. "Not only that, you learned how to live. You learned how to balance your freaking checkbook in college, there’s a lot of things. When you don’t get that, guys are coming to the NBA who are not fundamentally sound. All they do is practice threes, lift weights, get tattoos, tweet and go on social media. That’s it."

A seven-time All-Star, Worthy said that the current NBA is lacking well-rounded players.

"So you don’t have that sound player; you have an athletic player," Worthy said. "And that’s what’s happening to the game. It’s a lot of ISO and looking for mismatches. Bill Russell told me one time, they had five options off of one play. You don’t see that anymore."

The Gastonia, NC native also despaired at the state of the Lakers, the team with which he spent the entirety of his 12-year career, pointed to the team's inability to properly build a roster.

"I think they have refused to build over the years," Worthy said. "We’ve had some good players: [Brandon] Ingram, [Julius] Randle, [Lonzo] Ball. We have tried to win quickly. In Kobe’s last few years, we brought in [Steve] Nash who was a little bit older, Dwight Howard came in with a back injury. We traded away draft picks to try to win immediately and I think they’re going to have really think about how they need to build."

Worthy cited a number of teams from across the league the Lakers could emulate.

"You look at Memphis, you look at the way Boston is playing right now, you look at the way Milwaukee has built a team over time," Worthy said. "We need to create players that have cohesiveness. We had it a couple years ago and we traded it all away to try to win, to try to match what Brooklyn was doing and what other teams were doing with their 'Big Three' players. I think that’s going to go away. That’s an illusion, having the Big Three. You see what happened in Brooklyn, you see what happened with the Lakers. Even though everyone experienced injuries, you still should be playing better and you should definitely be in the playoffs. So the Lakers - it’s embarrassing and it’s unacceptable."

A three-time NBA champion, Worthy was inducted into Springfield in 2003.