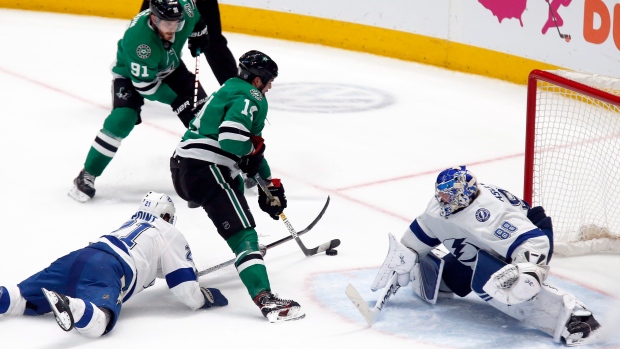 DALLAS — Jamie Benn knocked down the puck, quickly turned and didn't have to go far to score the winning goal for the Dallas Stars in overtime.

Benn scored 2:07 into the extra period after first deflecting a pass by Brayden Point, who then appeared to grab at the Stars captain from behind before a backhander past All-Star goaltender Andrei Vasilevskiy, as Dallas beat the Tampa Bay Lightning 3-2 on Monday night.

“I was lucky to knock that puck down," Benn said.

“We were making high-risk plays. One example is on the last goal for sure," Point said. “I tried to throw it to the middle and he picked it off."

It was the first game in nine days for the Stars. Their last game before the All-Star break and bye week was a 7-0 loss at Minnesota, a day after Tampa Bay had last played. Both the Stars and Lightning are in solid playoff position.

“That disaster in Minnesota, we put that behind us as quickly as we could,” Stars interim head coach Rick Bowness said.

Steven Stamkos had both goals for Tampa Bay, including the tying score with 1:26 left in regulation.

Vasilevskiy is 11-0-2 in his last 13 decisions, the only other non-win in that stretch being Tampa Bay's 4-3 overtime loss at home to the Stars on Dec. 19. He had won his last 10 games, one short of the franchise record.

"We see that and it rubs off on us when he’s really giving us a chance and battling," Tampa Bay defenceman Ryan McDonagh said.

Benn put the Stars up 2-1 on another backhander midway through the third period, when he was skating in alone before cutting across the front of Vasilevskiy and pushing the puck inside the post. His second two-goal game this season gave him 14 goals overall.

Ben Bishop, who Vasilevskiy passed last month for the most games in goal for Tampa Bay, stopped 23 shots.

“It's nice to get any win against any team. This is the third time I've played against them.” Bishop said, downplaying the significance of beating his former team. He played in 227 games for the Lightning from 2012-17.

Tampa Bay had an extra skater with Vasilveskiy off the ice when Stamkos scored his 20th goal, a one-timer from the middle of the left circle to tie it.

“Our compete was there in the game, but our brains just weren’t in it," said Tampa Bay coach Jon Cooper, whose team was 0 for 4 on power play.

Bishop said he was trying to clear the puck on Stamkos' second goal. But the goalie appeared to be shielded by traffic in the second period when Stamkos deflected a flying puck past him in the second period after Nikita Kucherov's shot from just inside the blue line that made it 1-0.

Vasilevskiy had 32 saves, including a sprawling stop of a shot by All-Star centre Tyler Sequin that ended up under his pads a minute into overtime. But there were just too many odd-man rushes given up by the Lightning.

“It was a little sloppy, for sure," Stamkos said. “I don’t know if it was a little rust from the break, but that’s not the recipe for us to be successful and we haven’t played that way in a while."

With Roope Hintz playing only one shift before an upper body injury, and Andrew Cogliano not returning after the second period because of a lower body injury, the Stars forwards had to switch things up to finish the game.

“Just picking up the team. It's not easy even when you lose one,” Benn said.

“Play 10 forwards that long, did a great job. We had guys playing left wing and centre ... right wing, left wing,” Bowness said. “We had to suck it up, and they did.”

NOTES: Stars D Stephen Johns had almost 14 minutes of ice time in his first home game since March 2018. He missed all of last season because of post-traumatic headaches, and he had only played in the 7-0 loss at Minnesota in the last game before the break. ... There was a pregame moment of silence for Kobe Bryant and eight others, including his 13-year-old daughter, who died in a helicopter crash Sunday. The arena is also home of the NBA's Mavericks, and owner Mark Cuban has said no Dallas player will ever again wear No. 24.