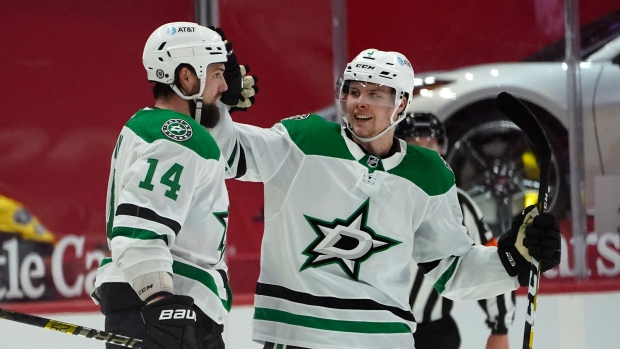 DETROIT — Jamie Benn scored 32 seconds into overtime, lifting the Dallas Stars to a 2-1 win over the Detroit Red Wings on Saturday night.

Dallas outshot Detroit by more than three times and had the puck for much of the game, but trailed after Dennis Cholowski scored late in the first period until Mark Pysyk made it 1-all early in the third.

“We just stuck to our game plan and kept playing the right way and figured eventually it was going to pay off,” Benn said.

Benn took advantage of a turnover by Detroit in the extra period, carried the puck into the left circle and lifted a shot over Jonathan Bernier's blocker.

“Benn made a great play" Bernier said. “He was looking pass the whole way, but (Filip Hronek) took that away, so he had to shoot. I got my blocker on it, so I wasn’t sure it went in.”

Anton Khudobin stopped 16 shots for the Stars and Bernier had a career-high 50 saves.

“We’ve lost enough of those games where we dominated," Stars coach Rick Bowness said. “We certainly deserved to win that. It’s crazy that it went to overtime, but give Bernier a lot of credit."

Dallas had a 21-3 edge in shots during the first period and had two power plays without getting called for a penalty and still trailed 1-0.

Cholowski scored his first goal of the season with 3:43 left in the first period, beating Khudobin on his glove side with a shot from the top of the left circle. At the time, the Stars were outshooting Detroit 17-3.

The Stars had an extra skater for two more stretches during the second and couldn't pull into a tie while having a 20-3 advantage in shots during the period.

Dallas pulled into a 1-all tie on its 44th shot of the game on Pysyk's second goal of the season early in the third.

The defending Western Conference champion Stars, who have won five of their last six games, are vying with fourth-place Nashville and Chicago to earn the Central Division’s fourth and final post-season berth.

The 32-year-old Bernier set a career high for saves. He also became the first goaltender to have 50-plus saves for the franchise since Jimmy Howard did it for Detroit in 2010 against Los Angeles.

After the loss, he was in no mood to celebrate his night.

“My job is to help us find a way to win and I couldn’t do that," Bernier said.

Dallas defenceman John Klingberg missed the game and is day to day with a lower-body injury.

The Stars improved to 6-2 in the season series against Detroit.

Stars: Return home to face Carolina on Monday for the first of two games on consecutive nights before going on the road for the rest of the season, playing seven straight games on the road.

“Competition level is going to be high and that’s what makes it fun,” Pysyk said. “You want to play in meaningful games and every one is exactly that.”

Red Wings: Play Tuesday night at Columbus and end the season in two weeks with two games on the road against the Blue Jackets in a matchup of teams trying to avoid a last-place finish.

Despite not having much at stake in the standings, Bernier said he and his teammates have plenty to play for.

“We’re playing for contracts or our place in the league,” he said.