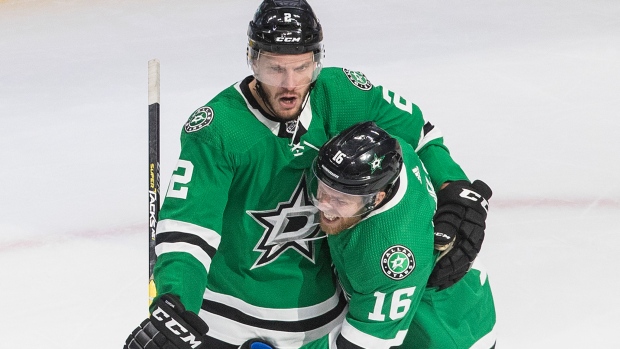 EDMONTON — The goal-starved Dallas Stars found their offensive mojo just in time to keep from going deep in the hole in the NHL playoffs.

Miro Heiskanen scored twice Thursday and the Stars held off a furious late comeback from the Calgary Flames to win 5-4 and tie their NHL best-of-seven playoff series 1-1.

Dallas defender Jamie Oleksiak redirected a pass from Corey Perry to score with 40 seconds left for the win.

The Stars controlled the game for two periods only to allow two late third-period goals from Calgary to tie the game at four.

"We just tried to work. It sucked they scored in the first period but as a team we battled back. It's been tough the last couple of games, but today we got those bounces," said Radulov.

There's little time for either team to dwell on the game.

Game 3 in the seven-game series goes Friday at Rogers Place.

Netminder Ben Bishop turned aside 24 shots for Dallas in his first start of the series. Cam Talbot stopped 31 and took the loss for Calgary.

"We knew they would come out harder and we had a lot of trouble the first two periods. I think we were sitting back a little too much," said Lindholm.

"But we battled back and at the end it was tight and it could have gone either way. But tomorrow we've got to be ready from the beginning."

Heiskanen (eight goals, 35 points in the regular season) has been a workhorse for Dallas in the post-season, jumping into the rush and making plays. The 21-year old Finn leads the Stars with two goals and five assists in five post-season games, including the three round-robin games.

Dallas, a low-scoring team at the best of times, scored only twice in regulation time in the round-robin to drop to third seed, and managed only two goals in a 3-2 loss to Calgary in Game 1.

They have been waiting for some offensive oomph from their top forwards.

It looked like deja vu for Dallas just 19 seconds into the first period, when Dube continued his red hot offensive game by scoring his third goal of the series.

After a shot caromed off the back boards right into the slot, Dube beat defender Esa Lindell to the puck and chipped it backhand over Bishop.

Dallas struck back before the period was out, scoring one goal with grit and another with skill.

Seguin fought off Forbort to tip a rebound past Talbot. Then Heiskanen, on a two-on-one rush, snapped a pass from Radulov low to the glove side on Talbot from the left face-off circle.

Heiskanen scored again early in the second, whipping a sharp angle knuckling puck from the left face-off circle that fooled Talbot. Forbort drew Calgary within one, wristing a puck from the blue line through traffic and in.

Dallas got the two-goal lead back before the period was out when Perry jumped on a rebound and whacked away until the puck crossed the line.

Calgary made it close with just over seven minutes to go in the third period. Rieder scored shorthanded on a breakaway and then Bennett, standing on the lip of the crease on the power play, redirected a Lindholm pass behind Bishop.

Dube, Bennett and linemate Milan Lucic continued to make their presence felt on the scoresheet and on the ice.

They repeatedly launched board-rattling hits on the Stars defenders as the speakers played canned "oohs and aahs" to mimic fans in the otherwise empty arena.

Matt Tkachuk, Calgary's top scorer in the regular season and a noted agitator, may be a question mark for Game 3.

He missed a few shifts in the first period after he got speared in the groin by Jamie Benn. In the third period he got sandwiched between Benn and Oleksiak, bonking heads with Oleksiak. Looking wobbly, he immediately went off the ice and down the tunnel to the locker room.

All Western Conference post-season games are being played at Rogers Place. Players are also staying isolated to prevent the spread of COVID-19.

This report by The Canadian Press was first published August 13, 2020.