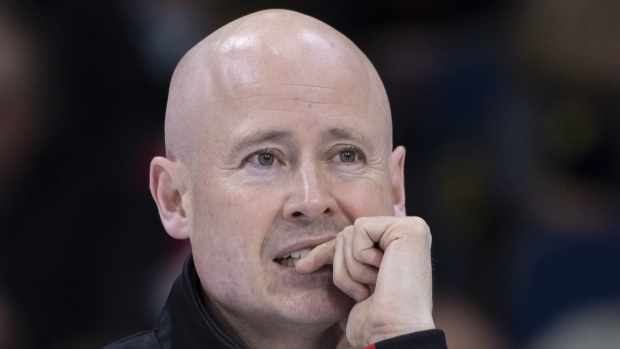 LETHBRIDGE, Alta. — Canada's Kevin Koe was not expecting to run the table at the world men's curling championship like he did at the Tim Hortons Brier.

The surprise on Wednesday was that his first defeat — a 9-3 loss to Japan's Yuta Matsumura — came in blowout fashion. The result knocked Koe out of first place and stopped his 24-game winning streak.

"It ended with a bit of an abrupt thud," Koe said. "But a loss is a loss. It was never going to go on forever, that's for sure."

Canada also dropped a 9-4 decision to defending champion Niklas Edin of Sweden in the evening. Edin scored three in the seventh end for a lead he wouldn't relinquish.

After 14 draws of round-robin play, Sweden and Japan were tied in first place at 8-1. Japan held on for an 8-6 victory over Scotland's Bruce Mouat in the evening to lock up a playoff spot.

"We're at the top of the table," Edin said. "So looking really good from here."

Switzerland's Peter De Cruz was at 7-1 while Canada fell into a fourth-place tie with the United States at 6-2.

Koe started his win streak at the Alberta playdowns last February. He rolled to victory at the nationals last month before winning his first six games at the Enmax Centre.

That momentum was sapped in a hurry by an efficient Japanese side that started strong and didn't let up.

Koe missed a double takeout attempt in the first end and Japan made an open draw for two. Koe was forced to a single in the second and Matsumura hit a nose double for five points in the third.

"We were in trouble really all end and didn't really have a chance to bail," Koe said.

The teams shook hands after the minimum six ends.

Japan finished at 90 per cent overall while Canada was at 84 per cent. Japan had three players shoot 100 per cent on their hits.

"They just executed so well today, they weren't missing," said Japan coach Bob Ursel. "The skip just made some phenomenal shots for the big end there."

Neufeld said the team gave up some five-enders on the Grand Slam circuit this season. However, it was the first time in this competition that Canada had given up more than a deuce in a single end.

"It happens," he said. "We got into a situation where we were forced to put the game on the line a little bit. We just didn't make the shots to get out of it."

In the night game, Koe rubbed a guard on a triple takeout attempt in the seventh to allow Edin to draw for three. Sweden put it away with a steal of three in the eighth end when Koe was short on a double tap.

"There's no magic where we've got to do this or that," Koe said. "We've just got to find a way for all of us to get clicking.

"It seems like we've had two or three out of four going and it's not going to cut it against the top teams."

Canada has two more tough games on tap Thursday with matchups against Scotland and the United States.

Matsumura, the world No. 27, has earned four titles this season, including the Oakville Fall Classic and the Pacific-Asia championship.

He's making his second appearance at the worlds after finishing sixth in 2015. It was his first career meeting against the Calgary-based team.

"We didn't really get any pressure on them," Koe said. "We were kind of chasing all game. It's tough to take too much out of that game.

"If we play them again, I'm sure it would be a different story."

In the other evening games, Germany's Marc Muskatewitz scored three in the 10th end for a 7-6 win over Jaap Van Dorp of the Netherlands and Italy's Joel Retornaz beat South Korea's SooHyuk Kim 9-4.

Round-robin play continues through Friday night. Six teams out of the 13-team field will make the cut for the playoffs on the weekend.

Italy was alone in sixth place at 5-3. Scotland was next at 4-4 while the Netherlands fell to 3-5.

Medal games are set for Sunday.