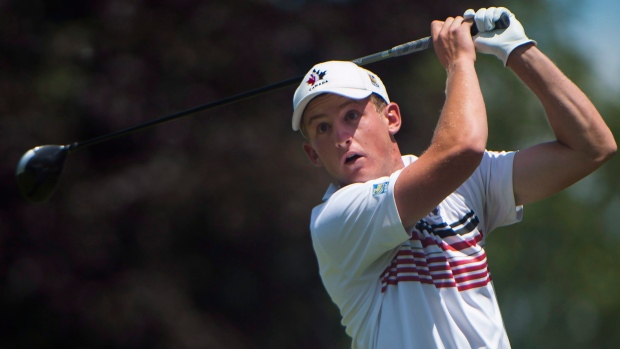 They certainly did for Jared du Toit at the Monday qualifier for this week’s Farmer’s Insurance Open in San Diego, Calif.

The 25-year-old from Kimberley, B.C., survived a crazy few days to earn a spot in the field. It will be his first PGA Tour event aside from three trips to the RBC Canadian Open.

“I’m pretty fired up,” said du Toit after getting a COVID-19 test at the PGA Tour facility that, if it comes back negative, will allow him to practice at Torrey Pines ahead of Thursday’s opening round.

Du Toit’s wild and crazy adventure started last Wednesday at a pre-qualifier where he posted a score of two under to sneak into the main qualifying tournament.

That took place at Bear Creek Golf Course in Murrieta, Calif., in some harsh conditions with wind and temperatures in the single digits.

“I was wearing my sweat pants under my rain pants and a tuque,” said du Toit. “I think that’s embarrassing for a Canadian to admit but it was really cold.”

When he returned in the morning, conditions weren’t much better. In fact, there was a two-hour frost delay. When he finally did go out to play, he was alone, accompanied only by an octogenarian spotter.

On the 15th and 16th holes, du Toit missed good opportunities for birdies. Standing on 17th, he knew his task and started on the right note by sinking an 18-footer for birdie. On the final hole, he missed the green with his approach and sat about 25 feet from the hole. Even without much feeling in his hands due to the cold, he hit a silky chip that rolled across the green and disappeared into the hole.

“I gave the biggest fist pump and the only guy to see it was the scorer,” laughed du Toit.

The 2-under 70 was good enough to put him into a playoff with four other golfers. On the first extra hole, he made his third consecutive birdie to advance to the big time.

“This is great,” du Toit said. “I’ve been working hard on my game and it’s nice to see things come together.”

To add to the week, du Toit was informed by Monday Q, a twitter account that follows Monday qualifying, that his hotel room at the qualifying event was being paid by an anonymous PGA Tour pro who tries to help up-and-coming golfers. Not only that, but the same pro is picking up the Canadian golfer’s bill at the Farmers Insurance Open as well.

“I’m not sure who he is but it’s a great help for guys like me,” said du Toit.

Now he’ll try to keep the momentum going when he tees off on Thursday morning at 11 am PT on the North Course at Torrey Pines. He’ll look to improve on his finish at the 2016 RBC Canadian Open when, as an amateur, he was one shot back of Brandt Snedeker after three rounds before finishing tied for ninth place.