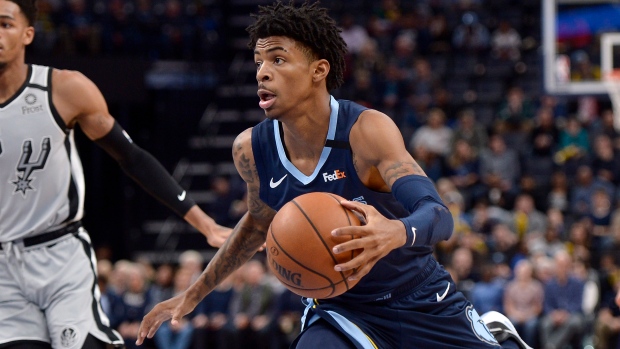 MEMPHIS, Tenn. — The Memphis Grizzlies are on their longest winning streak of the season, defeating teams above them in the standings and relying on youthful excitement in their drive for a spot in the post-season.

The victory put the Grizzlies percentage points ahead of the Spurs for eighth place in the Western Conference. And, while there still is more than half the season left, Memphis players were aware of the victory’s meaning in the standings.

“Playoffs is a goal,” Valanciunas said. “We’re playing better and better every day, so it’s fair to dream about playoffs, right?”

The Spurs' play Friday night was not indicative of their recent performances in which they recorded double-digit wins over Eastern Conference leaders Milwaukee and Boston earlier in the week.

“If you don’t bring it in the NBA, you don’t win,” Spurs coach Gregg Popovich said. “I think we had three or four guys who were no-shows, and that didn’t help.”

DeMar DeRozan held up his end, matching his season-high with 36 points, and adding nine assists and nine rebounds for the Spurs. LaMarcus Aldridge and Bryn Forbes each scored 21 points, combining to go 9 of 17 from 3-point range.

“Lately, I think we’ve been playing better than we’ve played all season,” Forbes said, adding “(Friday), it was the small things.”

Unlike when the Spurs defeated the Grizzlies 145-115 on Dec. 23, Memphis charged to a double-digit lead in the first half, with the margin reaching 15 points. But the Grizzlies squandered much of the advantage in the closing minutes of the first half, clinging to a 63-57 lead at halftime.

DeRozan helped keep the Spurs close in the third quarter, scoring 18 in the frame as Memphis held a scant 100-98 lead heading into the fourth.

“If he didn’t do what he did, we would’ve gotten beat to death,” Popovich said of DeRozan. “ … Too many guys were basically deferring to the basketball gods.”

But the Spurs were still close midway through the fourth. One of Aldridge’s 3-pointers pulled San Antonio within 116-113 with 6:28 remaining. But the Grizzlies converted a trio of 3-pointers, two from Brooks, and built their lead to 125-113. Meanwhile, Morant was going 6 of 8 from the field for 12 points in the closing frame, the ninth time the rookie and second overall pick in last summer’s draft has recorded double-digit scoring in the fourth.

Grizzlies: Played the second game of a six-game homestand, their longest of the season. … Jackson has a 3-pointer in 27 straight games, matching the same string as Mike Milller for second-place in franchise history. Tyreke Evans holds the record of 31 straight. … Morant recorded his fifth double-double of the season.

The Grizzlies recorded 39 assists in the game, one off the franchise mark of 40 in 1997, back in the Vancouver days. “I feel like we are playing unselfish right now,” Morant said. “Coach keeps preaching that we’ve got like 30-plus assists in multiple games. … He’s always preaching just go out and compete, play unselfish, play together. I feel like that’s what we’re doing now, and it’s showing.”

NOSE FOR THE BALL

At one point in the game, Morant was out of control and — in desperation — fired a pass that was only a short distance from Valanciunas. It was too close for the 6-foot-11 centre to react before it hit him in the face. “Ja, you owe me a nose,” Valanciunas shouted across the Memphis locker room. “Sorry, big fella,” Morant responded with a laugh.

Spurs: Face the Raptors in Toronto on Sunday.