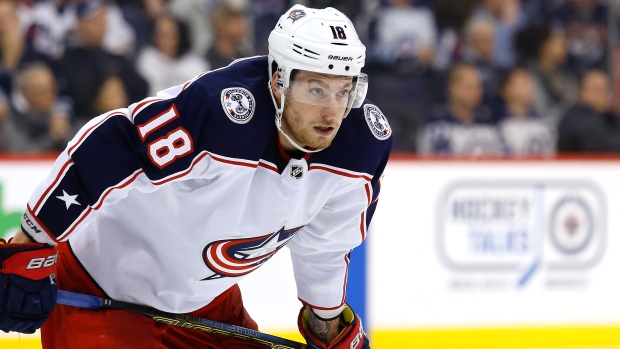 Columbus Blue Jackets general manager Jarmo Kekalainen pulled the trigger on the biggest trade of the 2020-21 season over the weekend when he acquired Patrik Laine and Jack Roslovic for disgruntled forward Pierre-Luc Dubois.

Despite signing a two-year, $10 million deal prior to the season, Dubois demanded a trade away from the team that drafted him in third overall in 2016.

Dubois has since indicated in interviews that, in part, it was contract negotiations that made him start to think about his situation in Columbus.

Kekalainen joined Leafs Lunch with Andi Petrillo and Dave Poulin on TSN Radio 1050 on Monday and refuted any possibility that the nature of his negotiations with Dubois could have driven him to ask for a trade.

Columbus Blue Jackets GM Jarmo Kekalainen joins Andi Petrillo and Dave Poulin to discuss what Patrik Laine and Jack Roslovic will bring to the Blue Jackets, how he is still unsure of the reason why Pierre-Luc Dubois wanted out of Columbus and the outside perception of John Tortorella.

"That’s just flat out not true at all and he knows that, so I don’t know why he would say that or even insinuate something like that, because that’s not true,” Kekalainen told TSN. “It took all in all, I think 10 minutes to do his contract when we finally agreed on the length of the deal and we had everything from two years, to three years to eight years on the table. First, we didn’t really talk about it, that’s how Pat Brisson conducts his business, I have the upmost respect for him as a professional and how he handled the negotiations.

"There was never any problem with the negotiation of this contract, it came to a conclusion very quickly and I thought what we signed was a fair deal for both sides...Once the player and the agent wanted to engage in the talks and we agreed on the length, it was a very easy process. There was nothing about these negotiations and I wish that Pierre-Luc would tell the truth about why he wanted out. He hasn’t even told me; he hasn’t told his teammates or anybody else. It certainly wasn’t about contract negotiations; I can assure you of that.”

As far as swinging the deal, the Blue Jackets GM says the process started when Dubois asked for the trade but picked up after the game on Thursday night where Dubois was benched by head coach John Tortorella after only 3:55 of ice time.

"We started doing our due diligence when he made it clear that he wanted to move on and get a change of scenery and really accelerated after the last game he played for us here in Columbus,” said Kekalainen.

“Friday was a busy day and then Saturday morning we finally agreed on a trade with Winnipeg.  They’d been on top of our list of candidates the whole time. We thought he had the best match with them, but we had to do our due diligence around the league and see what the best return would be for a player like that.”

Kekalainen has had his eye on new acquisition Laine since he was playing junior hockey in Finland and said that he’s just as excited about the former Jet’s playmaking skills as he is about his noted goal-scoring abilities.

"He’ll be a great addition to our lineup,” said Kekalainen. “I’ve watched him since he was 17-years-old, or even earlier, he played as a double underager for the under-18 team for Finland and he was a superstar growing up. Everyone was talking about him and his ability to shoot the puck and so forth. I’ve always thought he was underrated for his passing too. I mean, you overplay him and he’ll find the seam and pass and make some great plays. I know that he’s driven to be the best and wants to win, so I think he’s willing to learn and get better in all areas of the game.”

Though he was benched in his last game with the team. Dubois said he did not want out of Columbus because of Tortorella. The question now is how Laine will deal with the sometimes bristly head coach.

Kekalainen believes that if you put in the work, you’ll never have a problem with Tortorella.

"I think Torts is very simple in his demands. If you work and you compete, you’ll be fine,” said Kekalainen. “He looks for your mistakes and he’ll coach you and teach you and try to make you a better player. If you do those two things, you’re fine. I can tell you this, our locker room is full of players that have all kinds of respect for Torts. They love playing for him and never had any problems with him. All of this outside perception about Torts is totally different than what he is like to work with.”

The Blue Jackets also picked up Columbus native Roslovic in the deal, a player that Kekalainen said will get an opportunity to play with his team and one that he’s looking forward to seeing in their uniform.

"It’s obviously an added bonus that he loves the city and wants to make the city proud. We liked Jack Roslovic a lot for the draft and we’ve liked him ever since,” said Kekalainen. “We think he has good potential; we think he can play centre. He was part of a very strong forward group and maybe behind some very good players in Winnipeg, but still managed to get 29 points last year and played on their second power-play unit. Their No. 1 power-play unit is probably the best in the NHL. Every time I’ve had talks with Chevy [Winnipeg Jets GM Kevin Cheveldayoff], I’ve asked about Jack and Chevy was probably sick of me asking about him.”