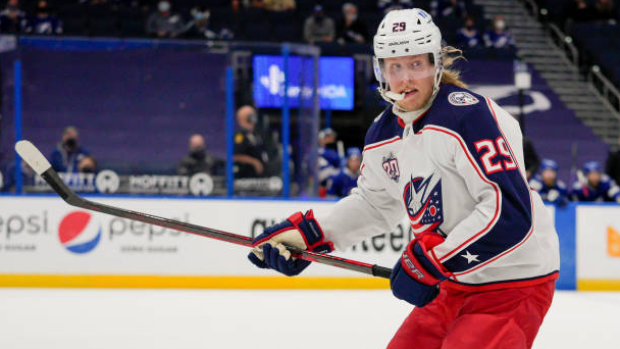 With Patrik Laine slated for restricted free agency this summer and under team control through at least 2022-23, Columbus Blue Jackets general manager Jarmo Kekalainen said Monday it is "self-explanatory" that the winger will be a key part of the team's future.

Acquired from the Winnipeg Jets in January, Laine struggled upon entering the Blue Jackets lineup, posting 10 goals and 21 points in 45 games with the team. Laine scored at least 28 goals in each of first four NHL seasons, including 44 goals in 2017-18.

"I am pretty sure that nobody is more disappointed in Patrik Laine's year than Patrik himself," said Kekalainen, who added he expects the 23-year-old forward to bounce back.

Kekalainen says with two more years of team control, it's "self-explanatory" Patrik Laine will be key part of #CBJ future. As for Laine's season: "I am pretty sure that nobody is more disappointed in Patrik Laine's year than Patrik himself." Expects a bounce back as he's just 23.

Laine posted two goals and an assist in the Jets season-opener before picking up a upper-body injury, which also forced him to miss time upon joining the Blue Jackets.

The franchise announced Sunday that John Tortorella will not return as head coach, though Laine said his struggles were not related to coaching style.

"It's not the system's fault. It's just my fault," Laine said Monday. "I don't think it matters who is behind the bench, I still have to go out there and do what I do, and I couldn't do that this year. I'll do that next year."

"I have enjoyed every minute I've been here," Laine added. "It was great to see the fans in the stands… I love it here and I want to stay here for sure."

Kekalainen added that some young players need to be given a "hall pass" after the added stresses of playing amid the COVID-19 pandemic.

"I think you have to give them a fresh start and a new opportunity to show what they can do in a normal year," the general manager said.

Kekalainen says you have to give some young players a "hall pass" if they had a tough year given everything that went on with COVID and protocols. "I think you have to give them a fresh start and a new opportunity to show what they can do in a normal year." #CBJ