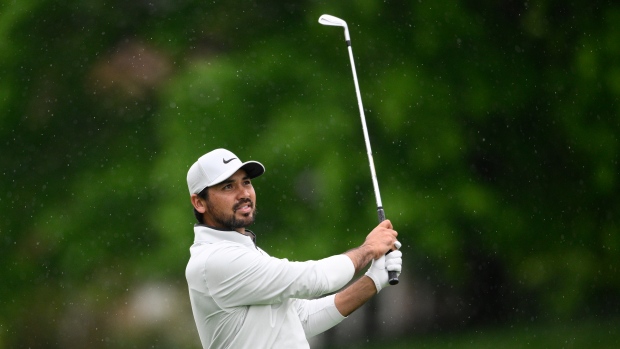 POTOMAC, Md. (AP) — Jason Day shook his head vigorously after holing an 11-footer for birdie on his ninth hole at TPC Potomac at Avenel Farm — not out of disgust, but to whip the excess water off his cap. For the rest of the round, Day shed the hat entirely.

Whatever it took to get through a wet blanket of a day in the Wells Fargo Championship.

Day expected a grind and got one, shooting a 3-under 67 in steady rain Friday to expand his lead to three shots. Going for his first victory in four years, the former No. 1 player was at 10-under 130 through two rounds and relishing the chance to relax and watch the rest of the field try to stay dry.

“I’m looking forward to it. It’s nice to be back in the mix, nice to be leading. It’s still two more days left, so I can’t get too far ahead of myself,” Day said.

The rain didn't stop for long in the afternoon as the scoring average at par-70 TPC Potomac ballooned to 72.6, three shots higher than Thursday. More rain, unseasonable cold and stronger wind were expected Saturday, followed by even colder temperatures Sunday.

Day got a tip from playing partner Max Homa, who was his closest pursuer after a 66. Homa told Day he flinched because water dripped from the bill of his cap onto his putter, causing him to ram his birdie attempt 6 feet by on the par-4 18th. Homa tossed the hat to caddie Joe Greiner before making the comebacker.

“I mean, not many times you see this hair, but hopefully this weather can kind of go away and we can have hats on for the weekend,” he said.

Day and Homa were grouped with Rickie Fowler, all past Wells Fargo champions at Quail Hollow in Charlotte, North Carolina. The tournament is making a one-and-done appearance at TPC Potomac because its usual venue is hosting the Presidents Cup in September.

The course is just fine by tour standards, but the weather couldn't be much worse for early May in the mid-Atlantic. Shots from the first cut of rough sent water splashing off the clubface, and dollar bill-sized divots landed in the fairway with a loud thud.

Nobody spent much time fussing over the ball in the group of Day, Homa and Fowler, who shot 72 and was eight shots back. Day didn't bother to take down the gallery ropes before hitting a flop shot from well left of the 17th green, and Homa efficiently took relief from an embedded lie without waiting for a rules official.

Day was pleased his retooled swing held up even when he felt out of rhythm.

“When you have conditions like this, it's really hard to commit to a shot because you’re going in there and you’re doing it kind of a lot quicker than your normal pre-shot routine,” Day said. “You have to force yourself to hit the shot and trust that.”

Homa opened with an eagle and made five more birdies in a round he wasn't sure he'd finish.

“I told Joe this morning I thought we might get to 8. The greens have held up really well,” Homa said. “We did just play 18 full holes in the rain, so it’s hard to say we got hooked up, but maybe, who knows. I’m just happy to be done.”

Denny McCarthy, from nearby Rockville, was the only player in the afternoon to challenge the top of the leaderboard. He had six straight one-putt greens around the turn, four of them to save par, and shot 69 to finish at 6 under, joining Luke List (66), James Hahn (68) and Kurt Kitayama (67). Keegan Bradley had the low round of the day, a 65 that left him five shots back.

Rory McIlroy, the highest-ranked player in the field at No. 7, shot 73 to finish at even par. Matthew Wolff, who shot an out-of-nowhere 65 on Thursday, fell back with a 73.

Four of the seven Canadians in the field made the weekend. Mackenzie Hughes of Dundas, Ont., shot a 73 but is in a tie for 29th at 1 under for the championship.

Michael Gligic of Burlington, Ont., fired a 69, Abbotsford, B.C.'s Nick Taylor shot a 73 and Corey Conners of Listowel, Ont., finished with a 71 as they each sit in a tie for 50th, just making the cut at even par after the first two rounds.

The three other Canadians in the field, Adam Svensson, Drew Nesbitt and Roger Sloan, all failed to make it to the weekend.

A day after he told a rules official he “can't wait to leave this tour,” Sergio Garcia was 5 under at the turn but bogeyed two of his final three holes for a 71. He was eight shots back and declined to speak to reporters for the second straight day.

Morgan Hoffmann, making a long-shot bid to keep his tour card after two years away from golf because of muscular dystrophy, missed the cut with rounds of 73 and 80. He has one start remaining on a major medical extension and needs a tie for second to earn full status for the rest of the season.