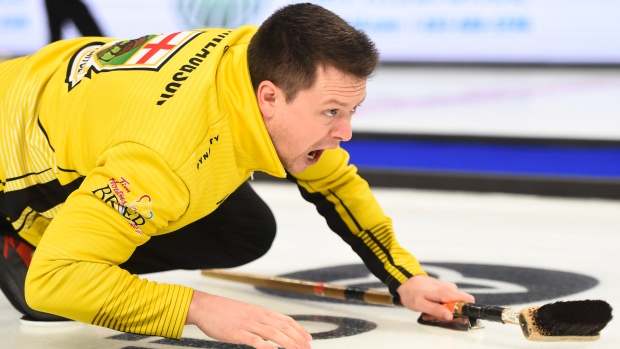 Jason Gunnlaugson's rink from Winnipeg returned to the pebbled ice this weekend and captured the DEKALB Superspiel following a 5-3 win over Team Karsten Sturmay in the final on Monday.

Team Gunnlaugson with Adam Casey at third, Matt Wozniak at second and Connor Njegovan at lead were back on the ice at the Morris Curling Club this weekend after a 2-6 showing at the Tim Horton Curling Trials in Saskatoon last month.

They booked a spot in the playoffs after a 4-2 record in the round robin and proceeded to rout Luc Violette in the quarterfinal, 11-1, before dispatching fellow Trials competitor Tanner Horgan, 8-2, in the semi-final.

In the championship game against Sturmay, Gunnlaugson scored a deuce in the fourth end and didn't allow any deuces to be scored against his squad en route to victory.

On the women's side, 2011 Scotties Tournament of Hearts champion Amber Holland defeated Vancouver's Kayla MacMillan in the final, 6-4.

The foursome went 6-0 at the DEKALB Superspiel with wins over Switzerland's Irene Schori in the quarters and Rachel Workin of North Dakota in the semis.

Two-time Scotties champ Chelsea Carey was also at the event, losing to MacMillan in the semis. Also, Beth Peterson lost to Workin in the quarters while Mackenzie Zacharias did not qualify for the playoffs.

Elsewhere, North Battleford's Robyn Silvernagle won a bonspiel in Swift Current after an 8-3 win over Regina's Michelle Englot in the final.