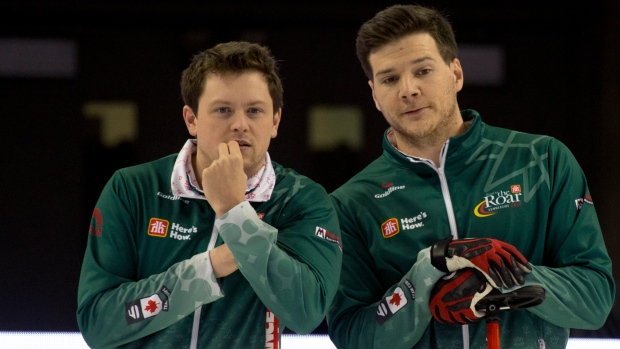 Team Jason Gunnlaugson third Alex Forrest is taking a step away from curling this season after representing Manitoba at the Tim Hortons Brier earlier this month.

The 31-year-old Winnipeg native says he wants to spend more time with his family, including wife D’Arcy, daughter Mila and son Bates.

"Very sad to be stepping back from curling and from a team with three amazing friends," he said in a Tweet. "There has been so many awesome memories that will never be forgot. But for now it is long overdue to spend some time focusing on being the best husband, father and even employee that I can be!"

Today we are saying goodbye to one of the best teammates you could possibly ask for.

Alex will be stepping away from the game for the foreseeable future.

Alex has made the decision to focus on his wonderful family his wife D’Arcy and his daughter Mila and son Bates pic.twitter.com/njFLmtrMnm

Forrest played in his first career Brier this season as Team Gunnlaugson qualified for the championship round, but missed out on the playoffs in Kingston, Ont.

"This week I am so sad. Not only is Alex extremely good at curling and one of the best teammates anyone could ever ask for. He also is such a wonderful husband, father, and employee. Mila's enthusiasm made this year so much more fun as she was a highlight of the Brier!" Gunnlaugson wrote in a Tweet. "Almost every season I have skipped I have been flanked by a Forrest. Alex and his brother Tyler both played for me in my WCT debut in Morris in early 2009 and between the two, have played all but one season on Team Gunnlaugson! I realize this decision is best for his family."

Forrest spent the last three seasons with Gunnlaugson and has also played with Matt Dunstone, William Lyburn and Jeff Stoughton in the past.