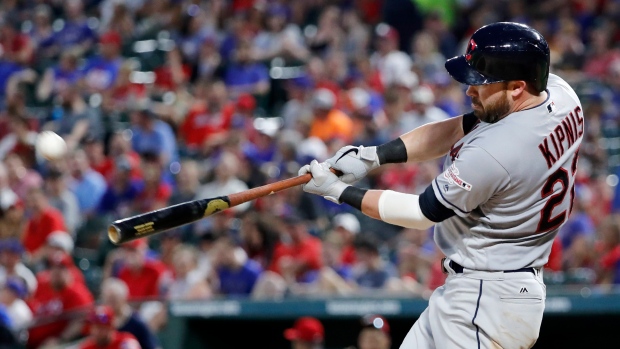 CLEVELAND — The Indians' post-season chances have been dealt another blow — second baseman Jason Kipnis has a broken right hand.

Kipnis will need surgery on the fractured hamate bone, the same injury that has kept third baseman José Ramírez out of Cleveland's lineup for weeks. The team said Kipnis will need four to six weeks to recover, which means the earliest he could be back is mid-October. By then, the Indians could be deep into their off-season.

They are still chasing first-place Minnesota in the AL Central and trailing Tampa Bay and Oakland for a wild card. The loss of Kipnis will make it even harder to make up any ground in the standings.

"I always feel like we'll figure it out," manager Terry Francona said. "Sometimes you lose a little margin for error. Sometimes it becomes more challenging. That's part of it. You deal with it."

The Indians has been ravaged all season by injuries, the most impactful ones to Ramírez, outfielder Tyler Naquin and two-time Cy Young winner Corey Kluber, who hasn't pitched in the majors since breaking his arm on May 1.

Naquin recently underwent season-ending knee surgery after crashing into the left-field wall while making a catch in Tampa.

The 32-year-old Kipnis, who was having a solid season, has been bothered by soreness in his wrist for several weeks. The two-time All-Star felt discomfort after taking a swing on Sunday against Minnesota and left the game after hitting a double.

An MRI taken Monday showed the fracture, and the team is co-ordinating with hand specialist Dr. Thomas Graham, who performed the same operation last month on Ramirez.

This could be Kipnis' final season with the club. He has been with Cleveland his entire career, and the team holds a club option for 2020 worth $16.5 million.

"It's like you get kicked in the stomach a little bit just because you've been with these guys now for seven years and through a lot," said Francona, who began managing the Indians in 2013. "Some thick, some thin. But you still come through it."

Kipnis is expected to address the media Wednesday.

The Indians have recalled utilityman Andrew Velazquez from Triple-A Columbus. The 25-year-old was acquired from the Tampa Bay Rays on July 3 and started at second base Tuesday.

A switch-hitter, Velazquez batted .244 with five RBIs in 12 games for the Clippers. He also has been slowed by left thumb and right hamstring injuries, going on the disabled list three times, most recently from Aug. 17-30. He has played five different positions this season.