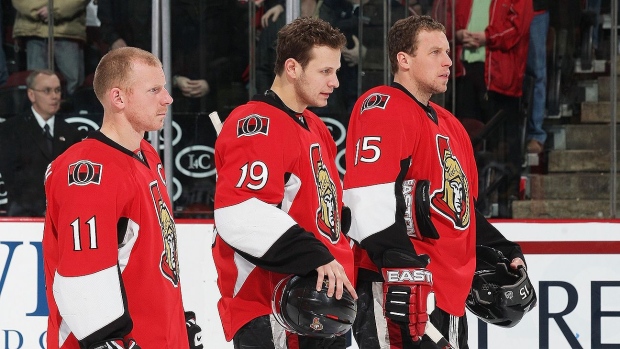 The trio made up what was affectionately called "The Pizza Line" because the line's scoring exploits normally meant free pizza for fans in attendance thanks to a promotion with Pizza Pizza.

"It's obviously a very cool honour," Spezza said of his inclusion. "It's a neat exercise the guys at TSN have been going through and it's obviously nice to be included in something like that. I had some great years in Ottawa and I look back on them fondly, so whenever they do things like this, it's nice to be recognized."

Spezza played in 668 games over 11 seasons with the Senators, notching 251 goals and 438 assists at a greater-than-a-point-per-game clip. Much of that was due to the success of the Pizza Line.

Spezza says he can't remember exactly when the trio was put together, but they clicked quickly.

"I hadn't played much with Alfie before - Todd White kinda played with Alfie in my early years," Spezza said. "But when Heater came [in a trade with the Atlanta Thrashers], I'm not sure when exactly it happened or how it happened, but I'm sure it's kinda something that happened throughout a game that we got thrown together, probably trying to play catch-up on a night. And then from that point on, we had unbelievable chemistry. It's really a unique feeling to have two linemates that you knew where theyre going to be at all times. To see some of the classic games on TV, we had a real chemistry that I don't think you can teach."

The 36-year-old Spezza credits his close friendship for Heatley as for one of the reasons why the trio was so lethal.

"Me and Dany were best of friends," Spezza said. "We had great chemistry as linemates. We had a great connection as a line because we were all really honest with each other. If you talk to guys who played on those teams, we had some big arguments amongst ourselves and Heater would always tell me how open he was and I'd get back to him that if he was open, I would have passed to him. They were just fun dynamics and when you get close with guys that way, you're able to have that dynamic and then you have fun around it. Then it becomes special."

The now retired Heatley got in touch with Mendes to express gratitude for his inclusion, as well.

I reached out to Dany Heatley today, after he made the All-Time Sens team on @TSNHockey.

This is what he had to say about making the team and being placed on a line with Jason Spezza & Daniel Alfredsson: pic.twitter.com/QwFTyuQY3z

"I would say it's an honour to be part of the team," Heatley said. "I look back at my four years in Ottawa with nothing but good memories. Playing with Spezz and Alfie was an amazing time. Every day, every practice, every game was fun. They are two of the best."

Heatley left the Senators under acrimonious circumstances in a 2009 trade with the San Jose Sharks. Spezza, who has maintained a relationship with Heatley, hopes that one day fans in Ottawa will focus on Heatley's contributions to the team, rather than on his exit.

"We've all gotten older and grown up and when he looks back on the situation, maybe he would have handled it differently, but he definitely deserves to be part of the Ottawa Senators and the history of the team," Spezza said. "Hopefully, as the years go by, people forget the negative stuff and remember more of the positives when it comes to Heater."