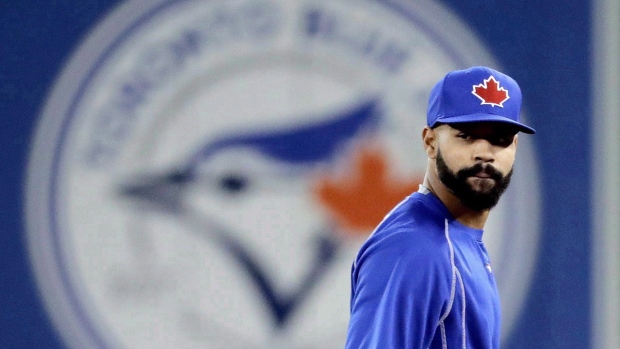 Dalton Pompey could be out for a while.

According to TSN Blue Jays reporter Scott Mitchell, Toronto is considering putting the concussed outfielder on the 60-day injured list. Mitchell adds the move would help open up a spot on the 40-man roster for a healthy bullpen arm.

Sounds like the #BlueJays are strongly considering a 60-day IL stint for Dalton Pompey, which would help get a healthy bullpen arm onto the 40-man roster.

"My heart breaks for him, man. The guy has had just an incredible string of bad luck. Any time that someone has a third concussion it's never a good thing. In terms of severity, it's not necessarily mild, so it's something we need to be concerned and very thoughtful about," general manager Ross Atkins said last week.

As for how the injury happened, Atkins had this to say:

"He was standing up in his locker, and the bats are stuck in where the hangers are, and the bats were leveraged in a way that when he hit his head, there was enough force that he was concussed."

Pompey, who has a history of concussions, was scratched from the lineup following the incident.

The Jays conclude spring training Tuesday night as they take on the Milwaukee Brewers in Montreal before they head to Toronto to host the Detroit Tigers in the season-opener on Thursday.