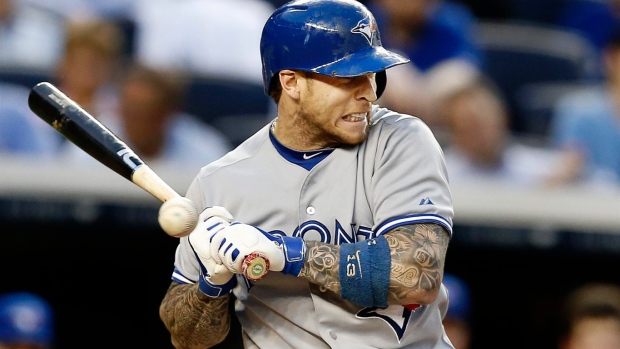 Delabar, just sent down Tuesday, and Cecil were both All-Stars last season.

In other news, infielder Brett Lawrie was out of the lineup against the New York Yankees after getting hit on the back of his left hand by a pitch Wednesday night. X-rays were negative but manager John Gibbons said Lawrie's hand was swollen and he couldn't grip a bat.

"He needs a day," Gibbons said.

Juan Francisco played third base, with Steve Tolleson at second. Lawrie, hitting .237 with 11 homers and 37 RBIs, has been starting in both spots this season.

Designated hitter Adam Lind remained out with a bruised right foot. Gibbons hopes Lawrie and Lind will be available this weekend in Cincinnati.

Cecil left Friday's game in Baltimore with groin tightness and rested for a few days before returning to the mound Wednesday night at Yankee Stadium. He got two outs but walked in a run and gave up a bases-loaded triple to Brian McCann.

Gibbons said Cecil's groin didn't feel great during his outing. The reliever is 0-3 with a 3.76 ERA and three saves in 32 appearances.

In addition, the Blue Jays announced that minor league lefty Ricky Romero had season-ending surgery on his left knee to clean out quadriceps tendon inflammation. The operation was performed Tuesday by Dr. Neal Attrache in Los Angeles, and Romero is expected to need about six months to recover.