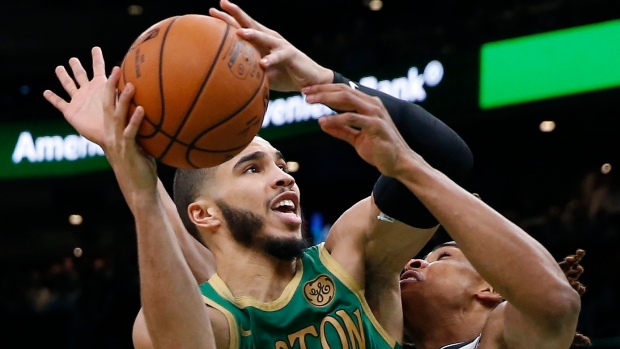 BOSTON — It's been a long time since Boston fans went home unhappy.

The Celtics remained perfect at home for the season, getting 26 points from Jayson Tatum and 21 from Jaylen Brown to beat the Denver Nuggets 108-95 on Friday night. Boston is 9-0 at the TD Garden, prolonging a city-wide streak in which none of the pro teams has lost a home game in regulation all fall.

No Boston team has gone home empty-handed since the Red Sox lost to the Baltimore Orioles on Sept. 28. The Patriots are 5-0 at home this season, and the Bruins are 12-0-5. (The Revolution won their last home game on Sept. 29, and the Pride of the National Women's Hockey League are 9-0 at home.)

“Hopefully, none of us lose at home,” said guard Kemba Walker, who scored 19 to help the Celtics win for the fifth time in six games.

Nikola Jokic had 30 points and 10 rebounds for Denver, which has lost three of its last four.

“We’re not playing well at all. We’re playing really bad, and we are second in the West,” guard Jamal Murray said. “So imagine when we start playing well."

Celtics: Stevens said injured forward Gordon Hayward will return to practice on Sunday and be ready to play before Christmas. ... Marcus Smart returned after missing one game with an oblique injury and illness. Every fan at the game received a poster of him. He had nine points in 28 minutes. ... Retired Patriots tight end Rob Gronkowski was sitting courtside. ... The Celtics and Nuggets were back together for the first time since Nov. 22, when Walker had a head-to-torso collision with teammate Semi Ojeleye. Walker was taken off on a stretcher, but he missed only one game with a neck injury.

Brown, who was the third overall pick in the 2016 draft, and Tatum, who went No. 3 overall the following year, have different personal and playing styles that are increasingly complementing each other on the court.

“I guess we feed off each other," Brown said. "It's like fire and ice."

Jokic went six games without hitting a 3-pointer, missing 16 in a row dating to Nov. 20. He was 1 for 5 on Friday night, making one in the fourth quarter.

“Seeing Nikola play the way he did tonight is a small victory for us," coach Michael Malone said. “I remind everybody, he set the bar so damn high last year in the playoffs that everyone expects brilliance every night and that’s a lot to ask for a young kid. Tonight was an example of him getting back to who he is and playing the game."

Boston made the first two baskets of the game and never trailed, leading by as many as 10 points in the first quarter and 15 in the second. The Celtics led 74-64 with less than two minutes left in the third when they ran off the last 11 points of the quarter, including six by Brown and a step-back 3-pointer by Tatum in the final seconds.

“Me and my teammates, we didn’t play very much defence,” Jokic said. “It seems like it was too easy for them.”

Nuggets: At Brooklyn on Sunday.