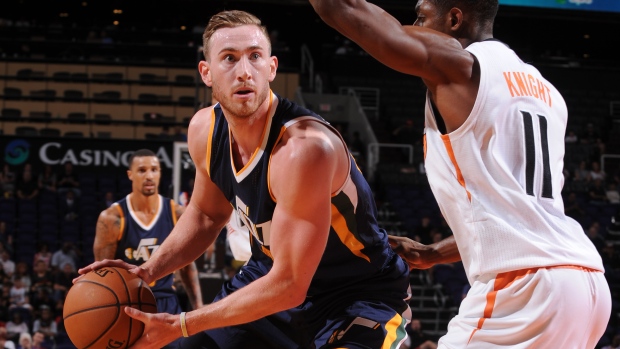 SALT LAKE CITY — Utah Jazz forward Gordon Hayward will miss an unknown amount of time after he fractured a finger on his left hand during practice Friday, the team said.

Team doctors determined the extent of the injury after an examination of Hayward at University of Utah Health Care's Orthopaedic Center on Friday afternoon.

General manager Dennis Lindsey said on The Zone Sports Network that he believes Hayward's finger got caught in someone's jersey during the workout. The fracture is to the fourth finger on Hayward's non-shooting hand. Lindsey said the joint is stable and has mobility.

The team said the 26-year-old Hayward will be evaluated further by the Jazz medical staff.

Entering his seventh season, Hayward has averaged 14.6 points, 4.0 rebounds and 3.4 assists over 443 games with Utah.

The Jazz are in better position to absorb the loss of their best player with the addition of Joe Johnson and George Hill. Johnson could start and Rodney Hood, Alec Burks and Joe Ingles can log minutes on the wing. Point guard Dante Exum also has the size to fill in at shooting guard or small forward in spots.