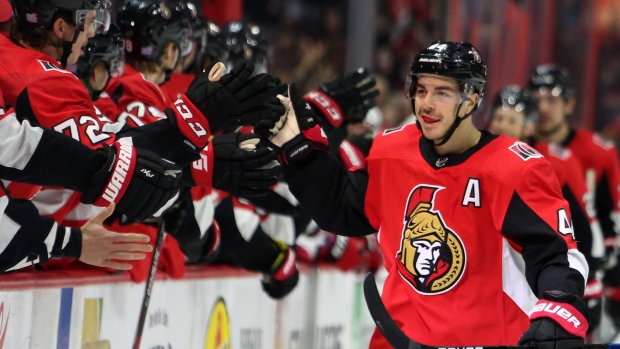 NEWARK, N.J. — Jean-Gabriel Pageau might be the NHL’s hottest goal scorer these days.

The 27-year-old Ottawa centre scored his first regular-season hat trick, including the go-ahead goal with 2:01 remaining, and the Senators rallied in the third period to beat the New Jersey Devils 4-2 on Wednesday night.

“He does it right, day in and day out,” Ottawa goalie Craig Anderson said. “He's the hardest-working guy in practice and he's a water bug out there and he makes sure he plays the right way and he gets rewarded for it. He's underrated skill — you guys don't know how much skill he has but he's got a great shot and some great hands and he's always in the right spot at the right time.”

Now in his eighth season with Ottawa and entering a contract year, Pageau has eight goals in his last six games to give him 11 in 18 games overall. He’s never had more than 19 in a season (2015-16).

“I think my linemates have been awesome,” said Pageau, who skates with Nick Paul and Connor Brown. “They work so hard every day, make it easy for me. I think we have a good chemistry on the ice because we spent a lot of time off the ice together. We do a lot of video and that's how we find each other on the ice. All of us are hard-working players that keep play simple and that's what’s working so well right now.”

Ottawa defenceman Mark Borowiecki tied the game with 6:30 to go. Pageau got the winner when he put the rebound of a shot off the post by Paul into an open net.

Pageau added his third goal into an empty net with 26 seconds left.

Senators coach D.J. Smith called Pageau a smart player. Pageau, who has two career playoff hat tricks, is plus-19 this season — the best mark in the NHL.

“He stays above you and lets you make a mistake and he capitalizes,” Smith said.

Anderson made 21 saves, including a breakaway stop on Taylor Hall midway through the third period with the Devils ahead 2-1.

Will Butcher and Wayne Simmonds scored for New Jersey, which returned from a five-game road trip. Mackenzie Blackwood stopped 21 shots as the Devils blew a late lead for at least the sixth time this season.

“This far into the season we can’t be having the same breakdowns and same things happening,” captain Andy Greene said. “How many games is that? Five off the top of my head right there. That’s not good enough. We have to be way smarter, way tougher and way harder to play against.”

Borowiecki tied it on a rising shot from the top of the left circle.

The winner came after Paul, who was stopped twice by Blackwood in the closing minutes, banged a shot off the post. Pageau had nothing but net to shoot at on the rebound.

Blackwood had made tremendous saves in close on Chris Tierney, Brady Tkachuk and Anthony Duclair late in the second and in the first half of the third period to keep New Jersey in front 2-1.

The Devils took leads of 1-0 and 2-1 in the first period on goals by Simmonds and Butcher.

Simmonds opened the scoring on a breakaway at 4:19. Miles Wood made the pass that sent him in alone on Anderson for his second goal in two games.

Pageau tied it at 14:54. He got the rebound of a bad-angle shot by Brown and stuffed it between Blackwood and the post.

Butcher restored New Jersey’s lead with 2:08 left in the period on a shot from the left dot that glanced off Anderson’s shoulder and into the top corner.

NOTES: Blackwood has started nine of the last 11 games for New Jersey. ... The teams play two more times this season, both in Ottawa. ... New Jersey D Sami Vatanen missed his second straight game with an upper body injury. ... The Senators are 4 for 62 on the power play this season after failing on their only chance Wednesday.

Senators: Return to Ottawa to face the Philadelphia Flyers on Friday night.