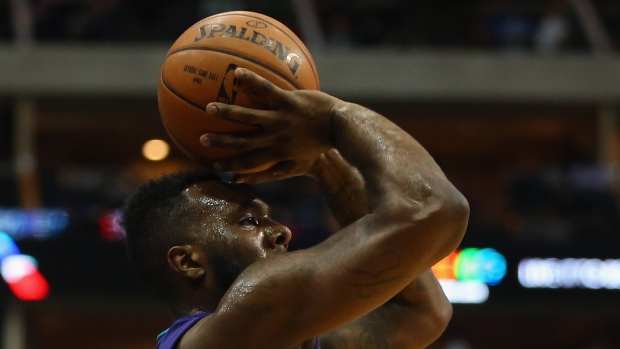 DALLAS - Al Jefferson scored a season-high 31 points on 15-of-18 shooting and Marvin Williams added 17 points and 12 rebounds as the Charlotte Hornets pulled away in the third quarter and beat the Dallas Mavericks 108-94 on Thursday night.

The victory was the first in Dallas following 11 defeats for the franchise that began as the Charlotte Bobcats in 2004-05. The Mavericks had run off 14 straight home wins over Charlotte's two NBA teams since the original Hornets won at Reunion Arena in January 1998.

Charlotte led 54-53 at halftime thanks in great measure to a 30-20 advantage on points in the paint. The Hornets outscored the Mavericks 24-14 in the third quarter, shooting 50 per cent while Dallas hit 22.7 per cent and missed on all eight of its 3-point attempts.

Jefferson, who had nine rebounds, hit five of six shots in the first quarter to help Charlotte to a 27-23 lead.

Dallas sought to use Chandler Parsons, who is limited to about 15 minutes a game following knee surgery last May, as a second-half spark after playing him only during the first half of his first two appearances this season. Parsons played 14 minutes in the second half and scored two points on 1-for-5 shooting, missing his three 3-point tries.

The Hornets went into the game leading the league averaging 11.5 3-pointers made per game after hitting 14 of 23 in Tuesday night's 130-105 win over Chicago. They hit 6 of 27 against Dallas.

Earlier Thursday, the Mavericks and coach Rick Carlisle agreed to a five-year, $35 million contract extension that runs through the 2021-22 season.

During the first quarter, Nowitzki became the 16th player in NBA history to pass the 45,000 mark in career regular-season minutes.