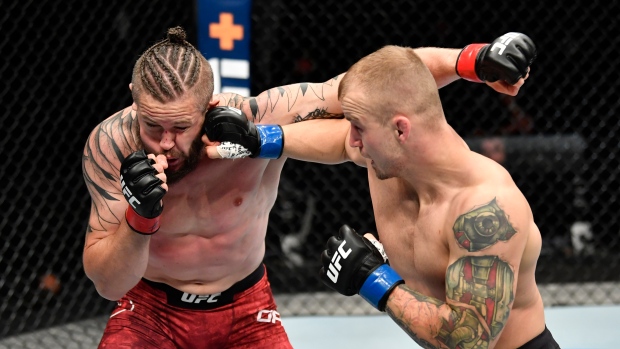 Canadian Jesse Ronson will make his return to the Octagon on an April 16 Fight Night card against Rafa Garcia, according to TSN’s Aaron Bronsteter.

The bout will take place in the lightweight division.

Per sources, 🇨🇦 Jesse Ronson will be making his octagon return at UFC Fight Night on April 16 against Rafa Garcia. Lightweight bout.

Ronson made his UFC return against Nicolas Dalby at UFC Fight Night: Whittaker vs. Till in July of 2020.

The 36-year-old earned a rear-naked choke submission victory, however, that result was overturned to a no contest after he tested positive for a metabolite of the banned substance methandienone.

Ronson was suspended 20 months for the failed test.

The London, Ont. native dropped three split decisions in his first stint in the UFC and is 21-10 (1) overall in his MMA career.

Garcia comes into the bout off a victory, his first in the UFC, over Natan Levy at UFC Fight Night: Vieira vs. Tate last November.

The win snapped a two-fight losing streak for Garcia, who dropped his first two outings in the promotion.