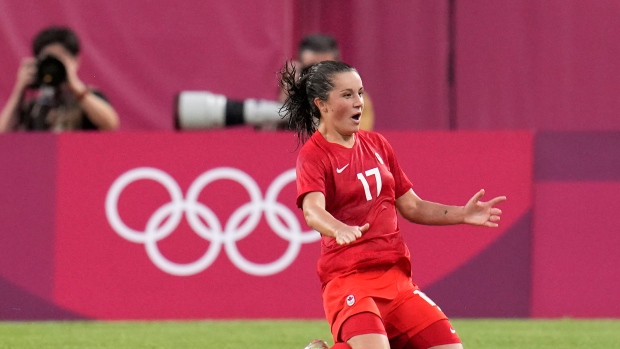 Canadians Christine Sinclair, Ashley Lawrence and Jessie Fleming are up for the Ballon d'Or, presented to the world's top soccer player.

Sinclair (Portland Thorns), the world's all-time leading goal-scorer with 187, captained Canada to the Olympic gold this summer in Japan. Lawrence (Paris Saint-Germain) and Fleming (Chelsea) were also part of that champion team.

"Very happy and grateful" to be nominated, Lawrence said on social media.

"It's about damn time Canadians get some respect on the international stage," added Canadian goalkeeper Stephanie Labbé. "Gold medal helped but these three have been phenomenal for the last few years."

Awarded by France Football magazine, the Ballon d'Or has been given out since 1956 when Stanley Matthews won. The magazine started its women's award in 2018.

The awards were not given out last year due to the pandemic.

The winners will be announced Nov. 29. Some 180 journalists from around the world will vote on the men's award while 50 journalists who specialize in women's football will decide the women's winner.

Messi and American Megan Rapinoe won the awards in 2019.

This report by The Canadian Press was first published Oct. 8, 2021.