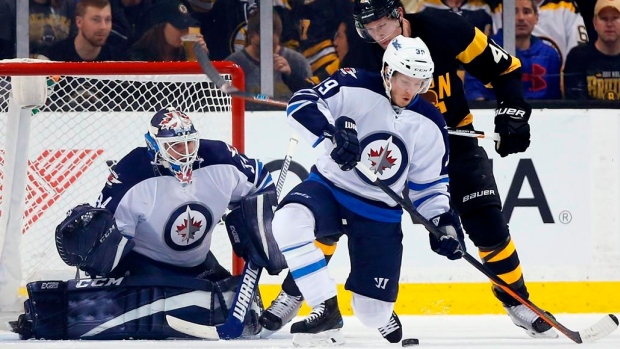 BOSTON — Brad Marchand was simply explaining how easy things felt for him on the ice Saturday night. He could have been talking about his entire team, though.

Tuukka Rask was rarely tested in his latest win, and Patrice Bergeron's power-play score capped a three-goal second period that carried the Boston Bruins to a 4-1 victory over the Winnipeg Jets.

"I think just some games you feel good and the puck seems to find you," said Marchand, who had a second-period goal.

"That was kind of one of those games tonight. I felt like when it bounces it's coming to me, and things kind of work out."

"We were skating, we were battling, our forecheck was great," Rask said. "We didn't give them any time, any space anywhere on the ice. A very, very good effort. What can I say? Only 12 shots, that's probably the least I ever faced."

Jets coach Paul Maurice took the blame for not preparing his team better.

"I didn't see it coming. I couldn't make enough adjustments to make a change, couldn't hide people on the ice to keep them off the minus-sheet," he said. "I'm not looking at that room. I'm looking at what I did to get them ready. It obviously wasn't enough."

Matt Beleskey and Tim Schaller also scored for the Bruins, who won for the eighth time in 11 games.

Adam Lowry scored for Winnipeg, and Michael Hutchinson made 34 saves. The Jets were outshot 38-12 while losing in regulation for only the second time in their last seven games.

Winnipeg's players talked about moving on from the loss.

"It was just one of those nights," Hutchinson said. "Every team is going to have them in an 82-game season."

The Bruins dominated play for most of the opening period and a half, but held just a 1-0 lead despite a 20-4 advantage in shots on goal until Marchand made it 2-0 at 11:37 of the second.

The winger collected a loose puck along the left boards near the Jets blue line, broke in alone and shifted around Hutchinson before tucking a backhander into the net.

With the Bruins on a two-man advantage, Bergeron one-timed David Krejci's pass from the left circle, with the puck sneaking between Hutchinson and the near post to make it 3-0 at 17:00.

Beleskey's goal gave Boston a 1-0 lead 2:01 into the second. He one-timed defenceman Joe Morrow's pass into the net from near the left faceoff circle.

NOTES: Boston needs one goal to join Montreal as the only NHL franchises with 20,000. ... David Pastrnak, who leads the Bruins with 10 goals, missed his second consecutive game with an undisclosed injury. D Colin Miller was a healthy scratch for the third straight game. ... The Jets didn't get their first shot on goal until 6 1/2 minutes into the game. ... The Bruins won the only other regular-season meeting this season, 4-1 at Winnipeg on Oct. 17. ... Linesman Darren Gibbs' helmet went flying off into Boston's bench when he collided with a couple of players.

Jets: At Carolina on Sunday in the third game of a five-game road trip, their longest of the season.