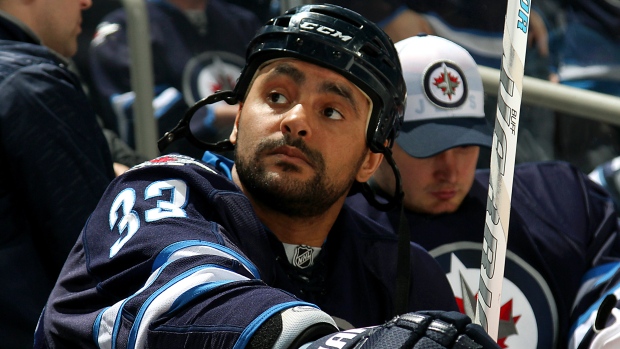 TORONTO - Dustin Byfuglien wasn't sure what kind of day was in store as he awaited word from the NHL on whether he was getting suspended for a hit on Brendan Gallagher.

"I was just kind of wondering what kind of afternoon it could turn (out) to be: a grumpy one or one that you're just getting prepared for a game," Byfuglien said.

Fortunately for Byfuglien and the Winnipeg Jets, Tuesday turned out to be a day of preparation. The league decided the big defenceman didn't make enough contact to the small Montreal Canadiens forward's head to warrant more discipline, so Byfuglien and the Jets move forward knowing his game is a lot about playing on the edge.

"I've got to play the way I play," Byfuglien said Wednesday as he prepared to face the Toronto Maple Leafs. "That's who I am. I just go out there, I play hard and do my job and just keep it simple."

Byfuglien has a history with the NHL's department of player safety. He was suspended four games late last season for a cross check on New York Rangers forward J.T. Miller and had been fined three previous times.

The six-foot-five, 260-pounder is not shy physically, but Jets coach Paul Maurice doesn't think Byfuglien is a reckless player. Quite the opposite, actually.

"You watch him as much as we do here, he lays off 85 per cent of what he does," Maurice said. "He is that big and strong, and he is careful on the ice. Some of the collisions don't look like it, but he has to be or he'd be getting reviewed with everything."

The NHL reviewed Byfuglien's hit on Gallagher, and in a video announcing there'd be no fine or suspension, directory of player safety Patrick Burke said the league largely accepted the explanation given for the hit. Because Byfuglien made a play on the puck and kept his skates on the ice and his elbow tucked, the league decided not to punish him.

Maurice compared it to a play in the Jets' game against the Calgary Flames, except that Jiri Hudler got out of the way. Byfuglien scored a goal on a rush up the ice seconds after.

That's the kind of play the Jets need out of Byfuglien, which is why they're glad he'll be available during their road trip that continues in Ottawa on Thursday.

"Obviously we don't want to lose the big man for any period of time," captain Andrew Ladd said. "He's such a big part of our back end and our power play and our physical game."

Maurice said he didn't expect the NHL to suspend Byfuglien but was pleased it turned out the way Winnipeg wanted.

Byfuglien didn't quite know how it was going to go. He pleaded his case in the hearing, waited and was glad he could continue the season uninterrupted.

"I think my wife actually was more relieved than I was," Byfuglien said. "It's tough for them to make calls. ...

"I'm not trying to make body contact on anything of that. They got to do what they got to do, but happy I get to play and as a team we just got to move forward now and we got to keep going."