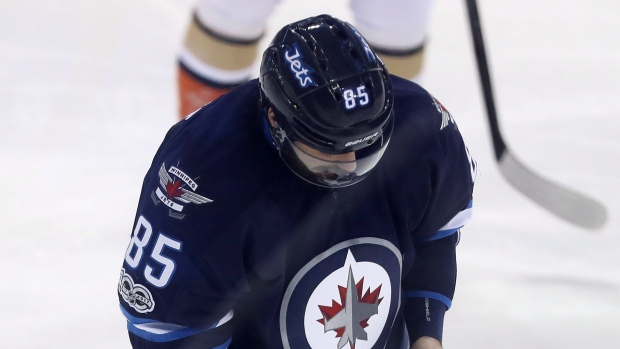 Winnipeg Jets forward Mathieu Perreault missed his team's final two games before the All-Star break due to an upper-body injury.

He revealed Monday that suffered a broken finger on a slash from Anaheim Ducks forward Corey Perry on Jan. 23.

Perreault left the game in the first period and did not return. He was believed to be dealing with a wrist injury.

The 29-year-old centre declined to say whether he thought Perry should have received league discipline for the slash.

“It was bad,” Perreault told Global News. “I ended up with a broken finger. You think it could be something there, but it’s hard on the play to see it.

Perreault will join the Jets for their three-game road trip, which begins Tuesday in St. Louis, and is hopeful to return on Thursday against the Stars, or Saturday in Colorado.

“Hopeful that somewhere on this trip he may get back in the lineup.” head coach Paul Maurice said Monday. “We’ll be cautious about that, but he was far better today than I thought he would be.”

The Drummondville, QC. native owns four goals and 12 points this season in 36 games. He had five points in his past four games before the injury.

Maurice said winger Drew Stafford while also join the Jets for their road trip. Stafford was injured on Jan. 21 against the St. Louis Blues.

Defenceman Ben Chiarot returned to the ice for the first time since Jan. 11 Monday, but will not travel with the team. Maurice said the same for defenceman Marko Dano, who is expected to miss another two weeks with the lower-body injury he sustained on Dec. 29.

Tyler Myers will also remain in Winnipeg this week. Maurice said the team is hopeful he'll be ready to practice when the Jets return from Colorado. Myers has been out since Nov. 11 with a lower-body injury and is currently alternating days, according to Maurice.