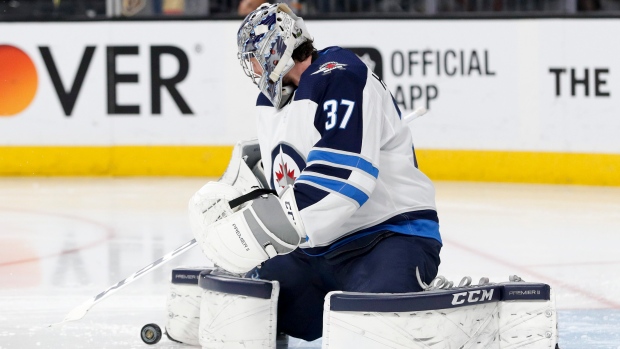 The contract carries a $6.167 million cap hit for Hellebuyck, who was a Vezina Trophy finalist last season. Hellebuyck will be the sixth-highest paid goaltender in the league this season behind Carey Price ($10.5 million), Henrik Lundqvist ($8.5M), Sergei Bobrovsky ($7.43M), Pekka Rinne ($7M) and Tuukka Rask ($7M).

The 25-year old is now one of four Jets signed through at least the 2023-24 season, joining Mark Scheifele ($6.125M), Nikolaj Ehlers ($6M) and Bryan Little ($5.29M).  He was one of seven restricted free agents for the team this off-season, Brandon Tanev, Marko Dano, Adam Lowry, Jacob Trouba, Tucker Poolman and Joshua Morrissey remain unsigned. According to CapFriendly, the team has just over $20 million in cap space remaining for this season.

He was drafted by the Winnipeg Jets in the fifth round (130th overall) of the 2012 NHL Entry Draft. Since then, Hellebuyck has recorded a .917 save percentage and a 2.55 GAA through 149 career games with the Jets.

Hellebuyck was coming off of a one-year contract worth $2.25 million.