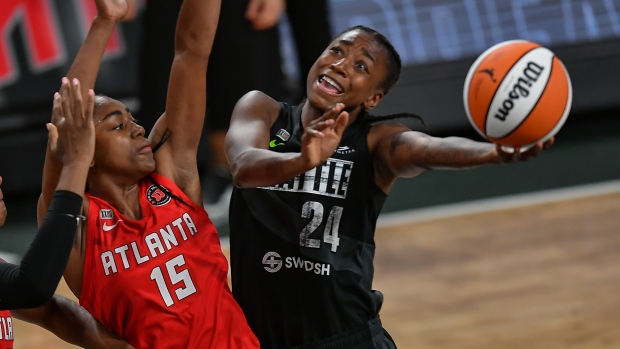 EVERETT, Wash. -- — Sue Bird had 15 points, Jewell Loyd scored four of her 10 points in the final 38 seconds and the Seattle Storm beat the Atlanta Dream 91-88 on Friday night.

Courtney Williams made a 3 to cut putt to Dream to 87-86 and closed it back to one with a jumper with 29.2 seconds. But Williams missed a 3-point attempt that would have tied it with two seconds left.

Bird had a pair of 3-pointers in the final four minutes for Seattle, which stayed tied with the Las Vegas Aces atop the WNBA standings.

Ezi Magbegor added 12 points, and Stephanie Talbot and Mercedes Russell added 10 points each for the Storm.

Williams had 20 points for the Dream (6-10). Crystal Bradford added 17 points, and Elizabeth Williams and Tianna Hawkin scored 10 points each.