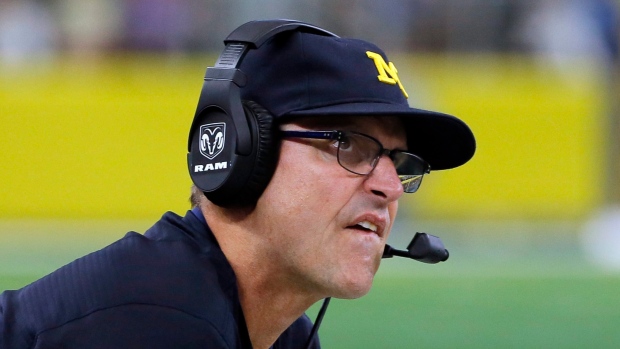 After seven seasons, Jim Harbaugh finally beat Ohio State and won a Big Ten title, but could that be it for his time at Michigan?

The Athletic's Bruce Feldman reports that there are indications from both NFL and Wolverines sources that the 58-year-old Harbaugh could be ready to return to the NFL.

“I think it’s real,” one source told Feldman about Harbaugh potentially going back to the pros.

Should he return, the most likely team for the former Pro-Bowl quarterback to join would be the Las Vegas Raiders. Feldman notes that Harbaugh has a longstanding relationship with Raiders owner Mark Davis.

But whether or not there's an opening there remains to be seen. Rich Bisaccia, who took over as interim head coach upon the firing of Jon Gruden, has the Raiders on the precipice of the playoffs with the team needing a win its Week 18 matchup with the Los Angeles Chargers, one of Harbaugh's former teams, to earn a postseason berth.

Feldman suggests that the Chicago Bears, the team with whom Harbaugh spent the first seven season of his career, could also be a possibility.

A native of Palo Alto, CA, Harbaugh appeared in 177 games over 14 seasons with the Bears, Indianapolis Colts, Baltimore Ravens and Chargers. In 1995, Harbaugh was named to the Pro Bowl and won the NFL's Comeback Player of the Year Award as a member of the Colts.

While he was an unpaid assistant for several years during his playing career under his father, Jack Harbaugh, at Western Kentucky, Harbaugh's first post-playing career coaching gig came with the Raiders in 2002 as quarterbacks coach.

After two seasons with the Raiders, Harbaugh became the head coach at San Diego where he would spend three seasons before taking over at Stanford.

With the Cardinal, Harbaugh amassed a 29-21 mark over four seasons, including going 12-1 in 2010 and defeating Virginia Tech in the Orange Bowl. Following the Orange Bowl, Harbaugh jumped back to the NFL and became the head coach of the San Francisco 49ers.

In his four seasons in the Bay Area, Harbaugh led the Niners to a 44-19-1 record, reaching the NFC Championship Game on three occasions and winning the NFC title in 2012. Harbaugh's Niners would ultimately lose Super Bowl XLVII to the Ravens, coached by older brother John Harbaugh.

He would depart for Ann Arbor in 2015. Over his seven seasons at Michigan, Harbaugh has a 61-24 record. This season, Harbaugh won his first Big Ten title and reached the College Football Playoff semi-final before falling to Georgia.

Last January, he signed a four-year extension with the Wolverines, taking him through the 2025 season.