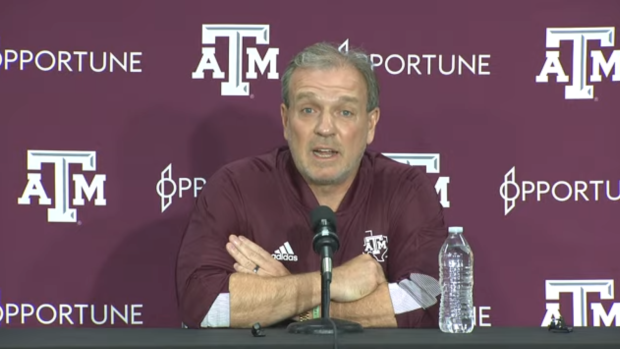 A visibly angry Texas A&M coach Jimbo Fisher fired back at Nick Saban on Thursday, a day after the Alabama head coach alleged that the Aggies "bought every player" in their recruiting class last year through their NIL practices, with a full-throated defence of his program and insinuations about the Saban's own dealings.

Fisher, heading into his fifth season with A&M, called having to do a press conference at all "a shame."

"It really is despicable," Fisher said. "It's despicable that somebody can say things about somebody and, more importantly, 17-year-old kids You're taking shots at 17-year-old kids and their families - that they broke state laws, that we bought every player in this group. We never bought anybody. No rules were broken. Nothing was done wrong...it's despicable that a reputable head coach could come out and say this when he doesn't get his way or when things don't go his way. The narcissist in him doesn't allow those things to happen."

Fisher, who served as Saban's offensive coordinator at LSU from 2000 to 2004, went on to suggest that the seven-time National Championship-winning head coach had shady practices of his own.

"Some people think they're God," Fisher said. "Go dig into how God did his deal. You may find out about a guy a lot of things you don't want to know. We build him up to be this czar of football. Go dig into his past or anybody that's coached with him. You can find out anything you want to find out, what he does and how he does it."

Fisher also said that he ignored a phone call from Saban earlier on Thursday and considers their friendship to be over.